Kashmir: Anger and anguish as slain militants' bodies are denied to their parents

In the past also, the funeral of local as well as foreign militants would attract thousands of mourners in the Valley 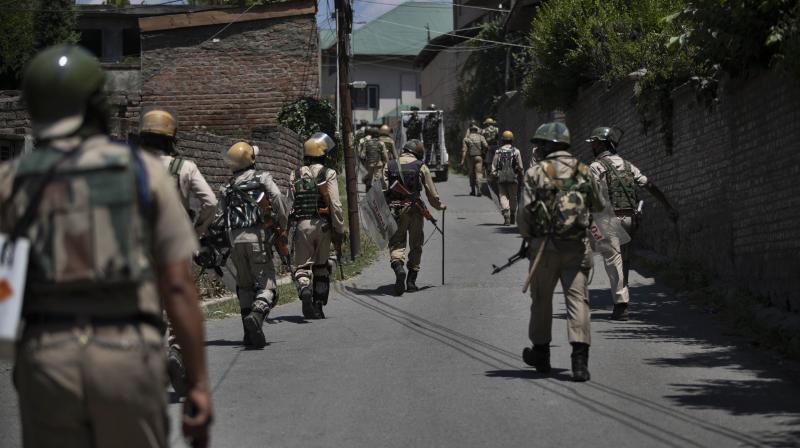 Soldiers walk towards their vehicle after returning from a gun battle with militants in Srinagar. PTI photo

Anger is brewing in Kashmiri families against the authorities denying the families of slain militants a right to give them what they say decent burial as per Islamic and local traditions.

“Laikin yeh zulm aur ziyadti hai (This is but cruelty and injustice)”, nitpicked Farooq Ahmed Langoo whose teenage son Shakoor Farooqui was killed along with two other cadres of Jammu and Kashmir chapter of the Islamic State (ISJK) in a gunfight with security forces in Srinagar’s  Pozwalpora, Zonimar locality on June 21. The police had claimed that Shakoor was involved in the sneak attack carried out by motorbike-borne gunmen in Ahmed Nagar, Pandach area on the peripheries of Srinagar on May 20, leaving two Border Security Force (BSF) jawans Rana Mandal and Zia ul-Haq dead. They said that the SLR rifle snatched from one of the slain BSF men was recovered from the June 21 encounter site.

“We begged before them and they told us that they will give us the body of my child by 5 pm. They didn’t. We told them they may bury it but in front of us…at least, two persons from among us should also be allowed to attend the funeral. But they refused,” Mr. Ahmed said.

His spouse Gulshan Farooq said, “They have been unkind to me. Now no other mother should face what I did.”  The slain militant’s uncle Muhammad Maqbool too is quite unhappy over the police authorities’ conduct. He said, “We too should have been allowed to fulfill our responsibility…just oversee how our children are laid to rest. This would have given us some relief but they refused. This is human tragedy and a blunder on their part too”.

Expressing her dismay, Shakoor’s aunt Naseema Maqbool said that heavens would not have fallen if he was buried at a cemetery close to his home. “We would go there to kiss it or just have a glimpse of it. What else could we do? But by denying us it they have inflicted such a wound on our hearts which will go only on the Day of Judgment”.

J&K DGP Dilbagh Singh said that the Shakoor and two other militants holed up in a private house were before the start of the combat given the opportunity to surrender. He said Shakoor’s parents and other family members made appeals to them to lay down their arms through the public address system. When they ignored it, the owner of the house was asked to make one last attempt to persuade the militants to surrender but to no avail.

In their stepped-up operations against separatists, the security forces have over the past two weeks killed 27 and, so far, this year 135 militants in the hinterland and a couple of dozen more along the Line of Control. Mr. Singh said, “The operations against militants are taking place at regular frequency now. Our forces on ground are strengthening and stabilizing further peace in this region and I’m happy over the outcome of these operations.”

Lately, the security forces are, however, also instead of handing the corpses of the slain militants to their families burying them quietly at far off places. This is for the first time since the outbreak of militancy in J&K in 1989 that the families of local slain militants and even civilians caught in cross fires are being denied the right to give their kin burial.

The authorities say that the decision-not to hand over the corpses to the families of the militants-was taken with a view to prevent mourners from attending funerals in large numbers as part of the effort to stem COVID-19. They said that in April a large number of mourners had after ignoring the warning of the local police authorities gathered at the funeral of a slain militant of Jaish-e-Muhammad in Sopore area of Baramulla district, risking their own and others’ lives. Inspector General of Police, Vijay Kumar said, “We will not be handing over the bodies to (militants’) families till this pandemic is gone.”

However, the families of slain militants are quite unhappy and human rights activists too have termed the decision as “inhuman” and also against international law. “This goes against our own laws, not to speak about Geneva Convention or other international laws, which recognize the right of the family members of a person which is killed in conflict to give him a decent burial. If you ask me, denying the families this right is also a human rights violation,” said Khurram Pervez, human rights activist and office-bearer of Jammu Kashmir Coalition of Civil Societies.

In the past also, the funeral of local as well as foreign militants would attract thousands of mourners in the Valley and each such gathering would be turned into a pro-freedom rally outburst, much to the discomfiture of the government. Former professor of law and international relations at University of Kashmir said that the authorities “are using the pandemic as an excuse to evade such embarrassment.”

IGP Mr. Kumar said that the slain militants are being given burial strictly as per their faith and local customs and before all necessary medico-legal formalities including collection of their DNA samples are conducted. “Also, we’re conducting burial in the presence of magistrates,” he said.