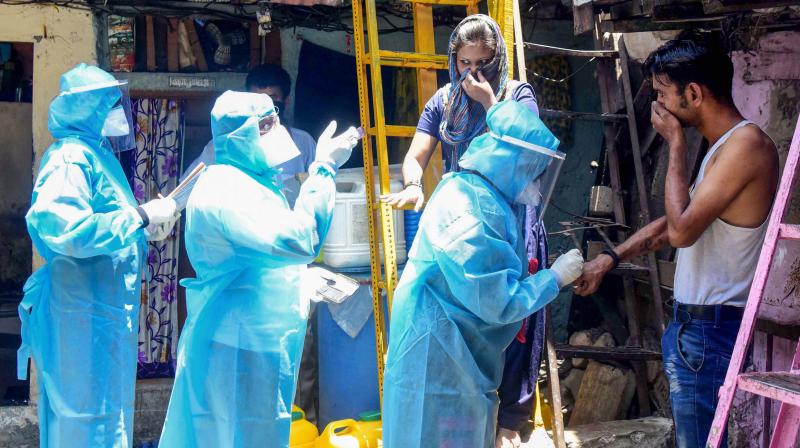 Health workers wearing protective suits screen resident of Kumbharwada during a house-to-house health survey, after detection of some COVID-19 positive cases, during the nationwide lockdown, at Dharavi in Mumbai. PTI photo

Mumbai: A case has been registered against 57 migrants labourers who set off for their hometowns hundreds of kilometres away on bicycles from Navi Mumbai, in violation of the lockdown imposed to curb the spread of coronavirus, a police official said on Thursday.

The police also registered a case against three shop owners who sold bicycles to these migrants during the lockdown, he said.

Some Turbhe police personnel on patrolling duty spotted a group of people on bicycles near Mahape in Navi Mumbai in the early hours of Wednesday.

When enquired, the migrants told the police that they set off from Turbhe and other neighbouring areas of Navi Mumbai to go to their native places in Uttar Pradesh, Bihar and Jharkhand, as they did not have any food or means to sustain their livelihood, the official said.

They also told the police that they purchased bicycles from three shops in Turbhe and nearby areas.

Their bicycles were seized and the three shop owners who sold them the two-wheelers were also booked under IPC Section 188, he said.

The workers were later asked to go back to their homes in Navi Mumbai and they were also provided sufficient food and grains, senior police inspector Sachin Rane said.

"We told them to stay at home till the lockdown is lifted and assured to provide food to them during this period," he added.