Congress vice-president goes to Saharanpur, meets affected families despite being told not to. 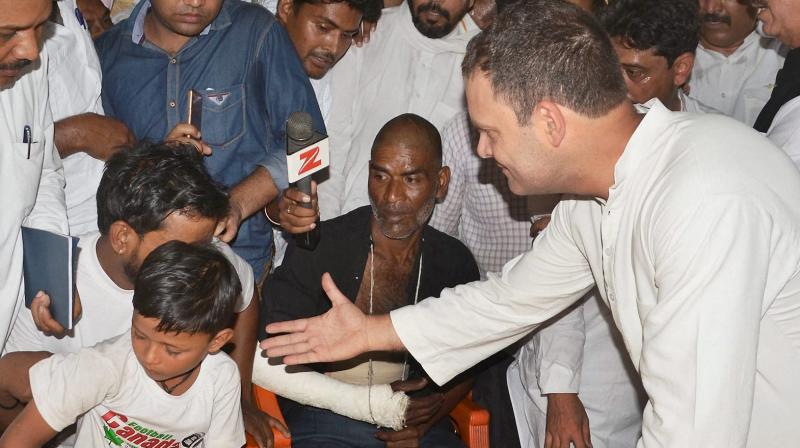 New Delhi: Congress vice-president Rahul Gandhi on Saturday visited Saharanpur district in Uttar Pradesh, which has been marred by violence between two castes. He met with dalit families affected by the strife.

The district authorities had on Friday refused permission to Mr Gandhi, citing volatile situation there. After BSP supremo Mayawati’s visit to the area, fresh violence had erupted, leading to the death of a dalit youth.

“The BJP government in UP wants to crush and isolate dalits. And it is using all its might to stop those who will stand with them,” he said.

Taking on the BJP government at the Centre as well as the state, Mr Gandhi said: “When they fail to deliver they divide and distract. But anger and hatred will not convert into jobs or solutions.”

He criticised Prime Minister Narendra Modi for “failing to create jobs as promised”. “The government only listens to ‘suit-boot type people’ and not the poor.

Mr Gandhi’s visit comes barely a day after a show of strength by the Opposition parties in the national capital.Apart from Congress ally Samajwadi Party, BSP chief Mayawati also attended the meeting. It is understood that it was the dalit leader who pressed upon the parties to take up the Saharanpur issue in earnest.

Mr Gandhi had come to Saharanpur from Haryana's Yamuna Nagar side up to Sarsawan town. The officials told him that prohibitory orders had been imposed in the district in view of the prevailing situation.

ADG (Law and order) Aditya Misra told reporters in Lucknow that no political leader would be allowed to visit Saharanpur till the situation returns to normal. It may be recalled that fresh clashes had erupted in Saharanpur after BSP president Mayawati visited the district on May 23.