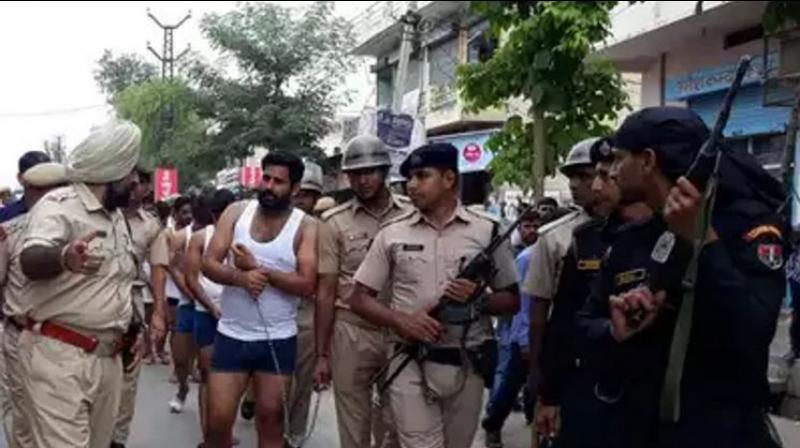 The parading of the gangster’s aides on Sunday was seen as an attempt by the police to instil fear among criminals and make residents feel safe. (Photo: PTI)

Jaipur: Thirteen men accused of helping a Haryana gangster flee a police station lock-up in Behror were paraded in a semi-naked state by the police for a kilometre on the streets of Alwar city on Sunday, reported Hindustan Times.

“In order to verify every single happening of the incident that took place on September 6, aides of Papla were taken to the spot and routes they had passed through (on the day of incident),” a senior police official told Hindustan Times.

“A reward of Rs 50,000 was declared on the accused paraded today. They all were involved in freeing Papla from the Behror lock-up,” the police official said.

A video of the parading incident that went viral on Sunday, showed that the 13 gangsters taken out in their undergarments were hand-cuffed and made to walk for a kilometre in the crowded marketplace.

The Alwar police had faced a lot of criticism after the September 6 incident. The parading of the gangster’s aides on Sunday was seen as an attempt by the police to instil fear among criminals and make residents feel safe.

Mirroring a scene from a Bollywood movie, three vehicles screeched to a halt outside the Behror police station, 15 to 20 people jumped out of the vehicles firing nearly 40 rounds at the police station on September 6. As policemen looked for cover, the attackers stormed into the station and walked away with Papla Gurjar.