He was sent to 15 days judicial custody by Additional Chief Judicial Magistrate Court. 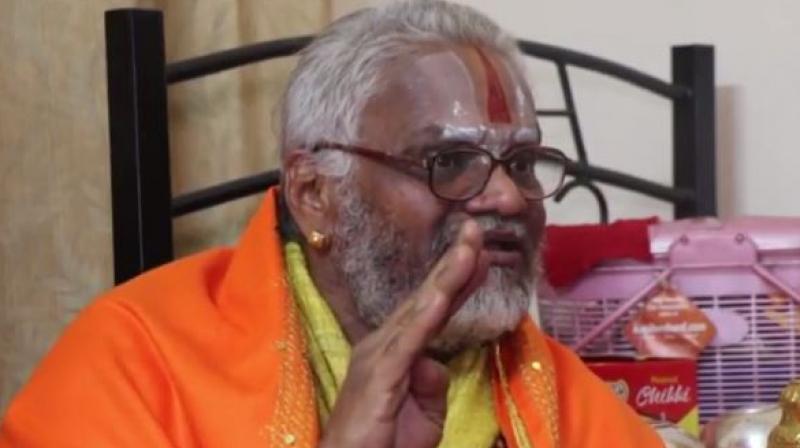 Baba Falahari was accused of raping a woman from  Chhattisgarh. (Photo: YouTube | Screengrab)

Jaipur: Rajasthan's self-styled godman, Baba 'Falahari' was arrested on Saturday by Alwar Police after he was accused of raping a female disciple from Chhattisgarh. He was sent to 15 days judicial custody by Additional Chief Judicial Magistrate Court.

Baba 'Falahari' was arrested from a private hospital, where he was admitted.

The 21-year-old victim from Chhattisgarh's Bilaspur had lodged a complaint against Rajasthan-based Falahari Maharaj, alleging sexual exploitation. According to reports, the victim was assaulted in his 'ashram' in August this year.

Reportedly, the police sent to him to judicial custody after they got a medical examination conducted on him at an Alwar's government hospital where his sugar and blood pressure were found to be normal.

Facing allegations of sexual assault, the self-styled godman reportedly had checked him into an Alwar's private hospital in earlier this week claiming that he was suffering from high blood pressure.

The 70-year-old Kaushlendra Prapannacharya Falahari Maharaj was dubbed as 'Falahari' Baba after he claimed to have survived by consuming only fruits for the last 25 years.

The incident comes nearly a month after Dera Sacha Sauda chief Gurmeet Ram Rahim Singh was convicted in two rape cases and was sentenced to 20 years in prison.