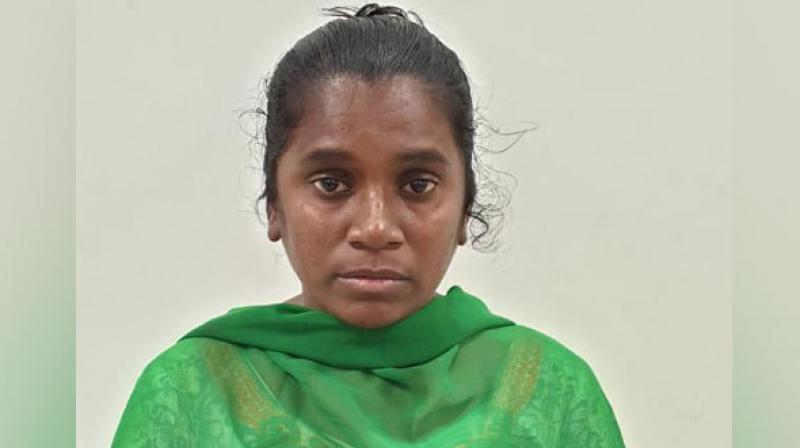 Sreelatha was apprehended by the Cyber Crime sleuths in Bangalore. (Photo: ANI)

"The accused women Y Sreelatha, 33 years has created a fake Facebook account in the name of "Sridevi Tummala", Producer Director at ETV Channel and causing damage to the reputation of the organization and also cheating the innocent people," said a police release released on Sunday.

A case was registered following the complaint of BVR Murthy, Chief Manager Operations, Eenadu Television Private Limited under section 419 (punishment for cheating by personation), 420 (cheating) and section 66 (C) and 66 (D) of the Information Technology Act.

Sreelatha was apprehended by the Cyber Crime sleuths in Bangalore.

"She admitted that she regularly watches the Telugu serials and got impressed on the Telugu TV artists Nishama, Sirisha, Karuna and others. While she was watching TV serial in July-2018, she saw the name of Sridevi Tummala as a producer of ETV Telugu. She got an idea of opening a Facebook Account in the name of "Sridevi Tummala" and interact with the aspirants who want to become TV and movie artists and used to collect money from them and lead a luxurious life," the release said.

"She opened a Facebook account in the name of "Sridevi Tummala" in the month of July'2018 and sent friend requests to TV artists Nishama, Sirisha, Karuna and others and used to chat with them regularly impersonating as actual Producer Sridevi Tummala," it said.

The police said that when aspiring artists contacted Sreelatha on Facebook, she induced them of providing a chance in the TV/Movies and collected money from them through bank transfer.

"In September 2018, she lured one artist Vamshi promising to give chance in TV serials and made him deposited an amount of Rs 50,000 to her Indian Bank account," the release read.

Sreelatha also allegedly cheated a man and collected Rs 6 lakh from him.

"She sent a friend request to one Kranthi Kumar of Manikonda and developed a close friendship with him by way of chatting through Facebook and sending photos of some other woman. He believed and fell in love by seeing the picture of some other posted by her. Taking this as an advantage she collected an amount of Rs 6,00,000 and got deposited in her Indian bank account at different times," the release said.

According to the Rachakonda police, Sreelatha was also arrested in March 2017 by Hyderabad Cyber Crime police for allegedly committing matrimonial fraud.