Woman tied to tree, thrashed brutally by husband in UP as onlookers smile

A UP village panchayat ordered beating of woman on March 10 because she was suspected of having an affair. 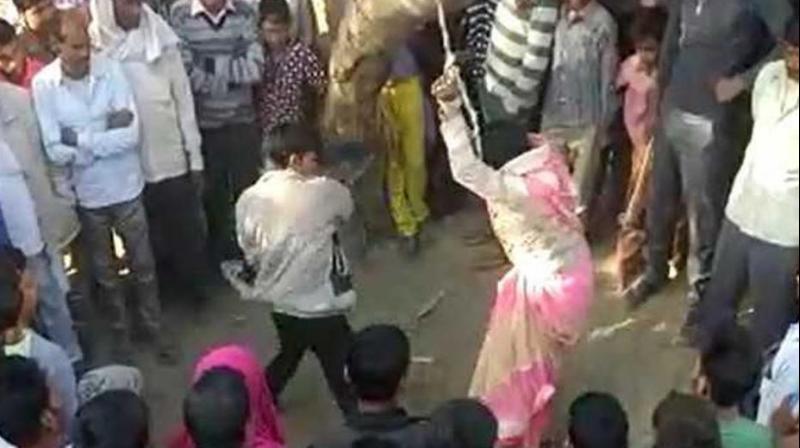 The video shows the husband beating the wife with belts and sticks and with every whip he was heard saying 'ab bhaag ke dikha (try to run away now)'. (Photo: ANI | Screengrab)

Lucknow: In an act of sheer brutality, a village panchayat in Bulandshahr district of western Uttar Pradesh ordered the beating of a woman for allegedly having an affair and eloping with her lover.

The disturbing video which went viral on social media shows scores of people - mostly men - congregated to see the husband of the woman tying her hands to a tree and beating her unabatedly while she wails in pain with each blow on her body.

Some of the onlookers were even smiling while no one inched up to stop the heinous act.

According to reports, a village panchayat of the Bulandshahr district had ordered the beating of the woman on March 10 because she was suspected of having an affair. Her crime and punishment were decided by the panchayat - one of the countless kangaroo courts that populate India's countryside.

The video, reportedly shot by one of the villagers, was widely circulated this week. It is a full house as people circle around the scene, watching the woman being beaten up for more than a minute.

The video shows the husband beating the wife with belts and sticks and with every whip he was heard saying "ab bhaag ke dikha (try to run away now)".

By the end of the ordeal, the woman is unconscious.

Three people, including the husband, have been arrested by the police after a complaint was registered on Wednesday.

The incident according to police occurred in Longa village of Syana region of Bulandshahr on March 10, but the video became viral only on Thursday and hence the FIR was filed against seven named and dozen unknown men.

According to station officer of Syana police station, Altaf Ansari, "We found out about the incident Wednesday night through the video. We investigated the matter and by morning everything became clear."

"We called the woman, spoke to her and registered a case. We have arrested the husband, the panchayat pradhan (village headman) and his son. We have filed a case against 20-25 unknown people," Pravin Ranjan Singh, a senior police officer, said.

According to reports, after she was beaten black and blue, the woman was dragged into a room where former pradhan Shersingh and his men allegedly molested her and asked to keep silent.

The woman also accused Shersingh of asking his men to make a video of the incident so that others could see the consequences of eloping.