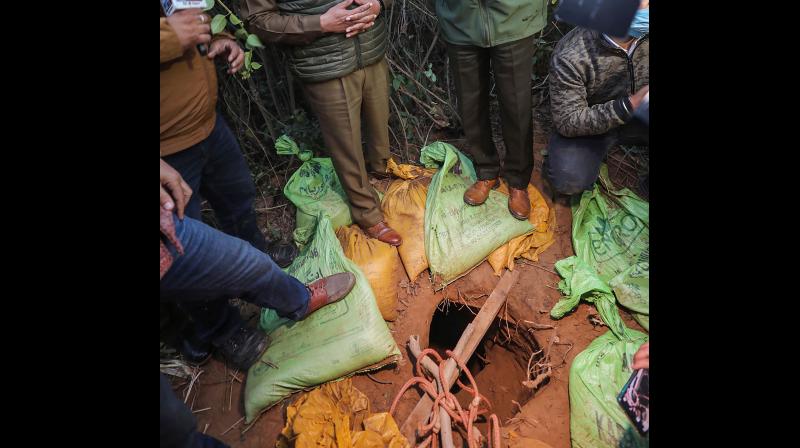 Security personel stand beside an underground tunnel near the international border in Samba sector, suspected to have been used by terrorists killed in a recent encounter in Nagrota, in Jammu district, Sunday, Nov. 22, 2020. (PTI)

SRINAGAR: The Border Security Force (BSF) on Sunday claimed detecting yet another 'suspected tunnel’ along the 198-km stretch of International Border (IB) with Pakistan in Jammu and Kashmir's Samba district. The tunnel may have been used for pushing in militants by Pakistan, it said.

J&K's Director General of Police, Dilbag Singh, said it is a 150-metre long underground tunnel which was unearthed following investigations into the recent encounter near a toll plaza in Nagrota area along Jammu-Srinagat highway in which four militants were gunned down by the security forces.

Mr. Singh after inspecting the tunnel scene along with BSF Inspector General, Jammu frontier, N S Jamwal, and Inspector General of Police, Jammu range, Mukesh Singh said, "The J&K police shared some vital inputs found from the encounter site with the BSF which after hectic efforts, managed to find the tunnel.".

The BSF claimed it found cement bags with Pakistani factory markings on these deep inside the tunnel.

BSF officials said that a patrolling party of the paramilitary force found a small tunnel in Regal area of Samba on the IB. “The tunnel is located close to the IB and is suspected to have been used for infiltration,” they said, adding that senior officers have rushed to the spot and investigation into the matter is going on.

The BSF is tasked to guard the 198-km stretch of the India-Pakistan border in Jammu region. Being part of  the 2,912 km India-Pakistan border from Gujarat to J&K, it starts at Paharpur in Kathua district and ends at Chicken’s Neck corridor in Akhnoor sector where the LoC begins. The LoC ends at NJ9842 (the northernmost demarcated point of the ceasefire line) down the Siachen Glacier over which both India and Pakistan claim sovereignty.

In India, this 198-km stretch is called the international border by New Delhi but Islamabad calls it a ‘working boundary’. Pakistan claims it passes through the “disputed” region of J&K.

The BSF has in the past also claimed discovering underground tunnels along the IB.

Meanwhile, a security alert was on Sunday sounded along the Line of Control in J&K's Poonch after a flying object was spotted in the district’s Mendhar sector.  Official sources said that the object was probably a drone which was reportedly shot by the Army.