When they ignored the police appeal, the owner of the house was asked to make one last attempt to persuade the militants to surrender 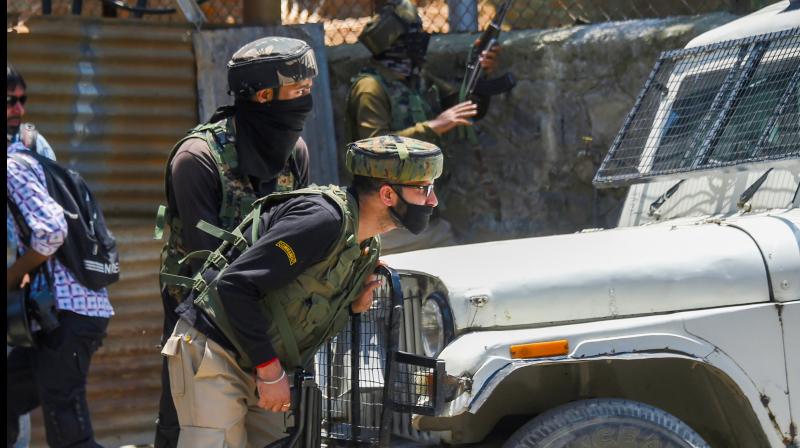 Security personnel take position behind a vehicle during an encounter with militants at Zoonimar area of Srinagar. PTI photo

Three militants believed to be the cadres of Jammu and Kashmir chapter of the Islamic State (ISJK) were killed in a gunfight with security forces here on Sunday.

The police officials said that one of the slain militants was involved in the sneak attack carried out by motorbike-borne gunmen in Ahmed Nagar, Pandach area on the peripheries of Srinagar on May 20, leaving two Border Security Force (BSF) jawans Rana Mandal and Zia ul-Haq dead. They said that the SLR rifle snatched from one of the slain BSF men was recovered from the encounter site on Sunday.

The house in Pozwalpora locality of Srinagar’s Zonimar area in which the militant trio was holed up was damaged in the security forces’ final assault.

Before the combat started early Sunday, the police officials made an appeal to the militants to lay down their arms through public address system. When they ignored it, the owner of the house was asked to make one last attempt to persuade the militants to surrender.

In a video clip, the man (name withheld) can be heard pleading before the militants trapped in his house, “Please, have mercy on me and my family. I’ve a large family to look after. My daughter’s wedding is scheduled for next month. My brothers, for God’s sake...have mercy on me and my family. Please, surrender. I had told you last night (about possibility of the security forces tracking them down) but you didn’t listen to me. They (security forces) conceded my request to give you one more opportunity to surrender. If you don’t do that they will torch my home. I have no money to rebuild it. Please, come out and surrender to save my home.”

Inspector General of Police (Kashmir range), Vijay Kumar, said that repeated attempts were made to persuade the militants to surrender, but they rejected the offer. “Yet the J&K Police and security forces showed patience and exercised utmost restraint, thereby ensuring a clean operation with no collateral damage in an otherwise highly congested and densely populated area of Srinagar City,” he said.

The police identified the slain militants as Shakoor Farooq Langoo, a resident of Srinagar’s Bharthana area, and Shahid Ahmad Bhat of Semthan village of Bijbehara area in southern Anantnag district. “The identification of the other killed terrorist is yet to be ascertained. All the killed terrorists were affiliated with proscribed terror outfit Hizb-ul-Mujahideen and ISJK,” a statement issued by the police here said. Local sources said that the third slain militant could be Mohsin Aslam Khanwan, also a local militants and resident of Srinagar’s Anchar, Soura area.

The officials said that a cordon-and-search operation was launched by the J&K police’s counterinsurgency Special Operations Group and the Central Reserve Police Force in Zonimar area at dawn on Sunday on “specific input” generated by local police regarding the presence of militants in the area. “During the search operation, the hiding terrorists were repeatedly appealed to surrender through their families and the community members of the area but instead they started firing indiscriminately upon search party, which was retaliated leading to an encounter,” the police said.

On Saturday evening, one militant identified by the police as Pakistani national Tayab Waleed alias Imran Bhai alias Gazi Baba, and reportedly affiliated with Jaish-e-Muhammad was killed in a gunfight in apple orchards in southern Kulgam district.

The police sources here said the fighting broke out between gunmen and the security forces in orchards outside Lokhdipora village in Nehama area of Kulgam after the latter laid siege to these on learning about the presence of militants.

This was the 9th encounter between the militants and security forces in South Kashmir in past three weeks. As many as 28 militants were gunned down in these clashes.

The Army had on Friday claimed that it sees a ‘palpable change’ on ground after each operation carried out against separatist militants in J&K and said the endeavour made together with local police and other security forces to bring peace is revealing glaring feats.

“With every operation that is being concluded we are moving on the path of peace. I can feel it on ground there’s a palpable difference that at the end of every operation the next operation is taking place under much cleaner circumstances,” the commander of Srinagar-based 15 Corps Lt. Gen. Baggavalli Somashekhar Raju told reporters here after eight militants were killed in two separate fire fights with security forces in south Kashmir’s twin districts of Shopian and Pulwama Thursday through Friday.