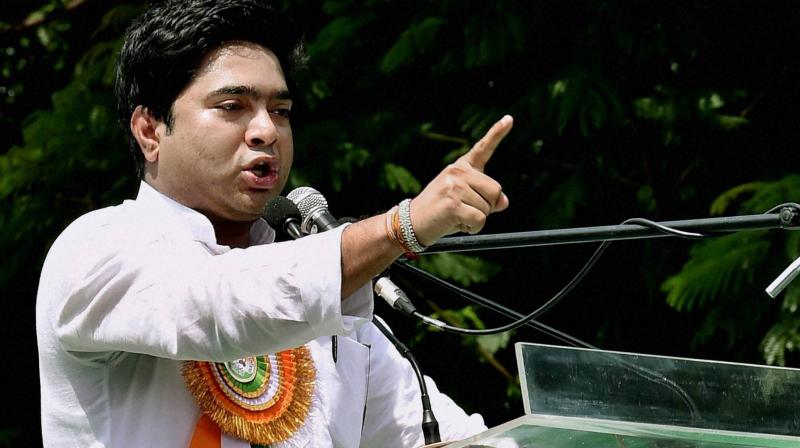 Kolkata: Taking its coal smuggling probe directly into West Bengal chief minister Mamata Banerjee’s family ahead of the Assembly elections, the Central Bureau of Investigation on Sunday served summons to her MP nephew Abhishek Banerjee’s wife Rujira Banerjee Narula, as well as her sister Menaka Gambhir, in the high-profile case, asking them to be ready to face questioning at their residences within an hour for their suspected role in overseas financial transactions relating to the illegal trade.

In the afternoon, a CBI anti-corruption team, mounting heat on the TMC supremo’s family, knocked on the doors of “Santiniketan”, the palatial South Kolkata residence of Mr Banerjee which is guarded by a strong Kolkata police contingent, and served the summons under Section 160 of the Criminal Procedure Code to his wife.

In the summons at her 188A Harish Mukherjee Road home in Kalighat, CBI additional superintendent of police (ACB) Umesh Kumar told Ms Narula:

“Whereas it appears that you are acquainted with the circumstances of the case noted below. which I am investigating under Chapter-XII of the Code of Criminal Procedure 1973, the undersigned along with CBI team will visit above address on 21.02.2021 at 1500 hrs. You are hereby requested to remain present on 21.02.2021 at 1500 hrs at above mentioned address for the purpose of answering certain questions relating to the case.”

A similar notice was also delivered to Ms Gambhir’s residence at Anandapur, off the EM Bypass in the city, at around same time. But the CBI team was told Ms Narula and Ms Gambhir were not at home then. The CBI team left an officer’s number for the two sisters to call back. Till evening, the CBI had not got any response, sources said.

Recently inducted BJP leader Shubhendu Adhikari claimed at a rally that Anup Majhi alias Lala, the absconding kingpin of the coal smuggling case, used to deposit around Rs 36 lakhs monthly to the Kasikorn Bank account of “Madam Narula” in Bangkok, Thailand. Tweeting a copy of the CBI summons at 4.15 pm, Mr Abhishek Banerjee alleged: “At 2 pm today, the CBI served a notice in the name of my wife. We have full faith in the law of the land. However, if they think they can use these ploys to intimidate us, they are mistaken. We are not the ones who would ever be cowed down.”

The CBI’s calculated move, a day before Prime Minister Narendra Modi’s day-long visit to West Bengal on Monday, when he is likely to announce a slew of new Central projects, came two days after a court summoned Union home minister Amit Shah to appear in person or through his representative on Monday in a defamation case filed by Mr Banerjee against him for levelling wild allegations about him.

Mocking Mr Banerjee for his repeated challenge that he would go to the gallows if the allegations of corruption were proved against him, Mr Adhikari said: “I request Tolabaj Bhaipo not to go to the gallows right now. There are a lot more left to be seen."