3 civilians killed, 39 others hurt in grenade blast in J&K's Tral 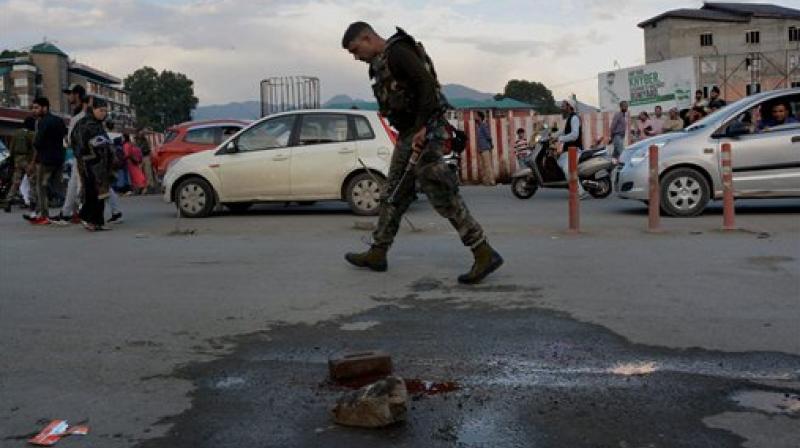 A security personnel looking for clues at the scene of a grenade blast by militants at Jehangir Chowk in Srinagar. (Photo: PTI)

Srinagar: Three civilians including a woman were killed and 39 others including some security personnel were injured in a grenade blast in Tral area of Jammu and Kashmir’s southern Pulwama district on Thursday.

The police sources said that the militants tossed a hand grenade towards the security forces on duty near Tral’s main bus stand as part of stepped up security for the visit of the State’s Public Works Minister Syed Naeem Akhter Andrabi.

The grenade fell on the road and exploded, killing two pedestrians including a woman on the spot and injuring forty others including seven CRPF personnel on duty. One of the critically injured civilians succumbed in a local hospital raising the death toll to three, the officials said. The dead have been identified as Ghulam Nabi Parag, Muhammad Iqbal Khan and Pinty Kour. 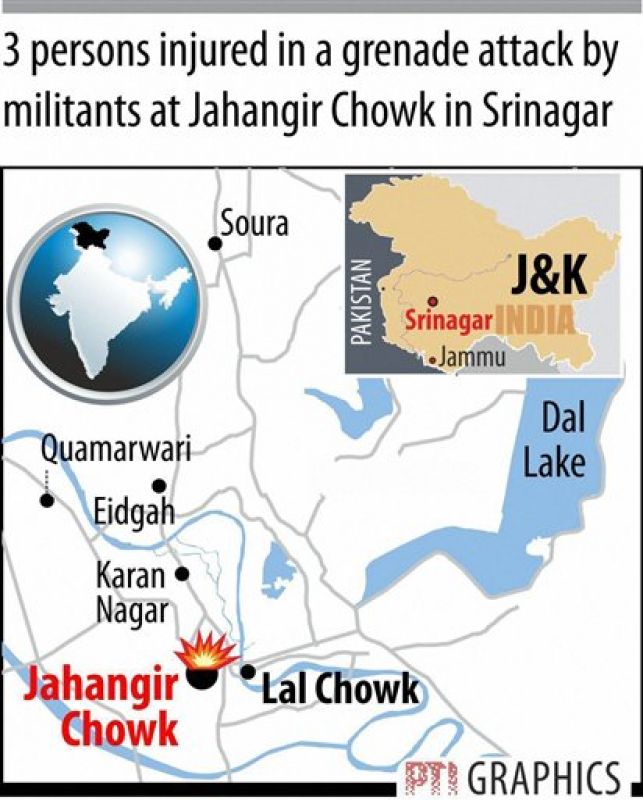 One report said that the grenade was thrown at the minister’s motorcade by suspected militants but the officials did not confirm it. According to this report, the splinters also hit two moving official vehicles, injuring two engineers and a driver.

The injured have been rushed to various hospitals in Tral and Srinagar. Reports said that the condition of, at least, four of them is ‘critical’.

The security forces’ reinforcements have laid siege to a vast area of Tral town, 45-km south of Srinagar, to begin searches.

Meanwhile, the police on Thursday said that a cordon-and-search operation has been launched in upper reaches of Banihal in Jammu region of the State following Wednesday night’s firing incident in which a jawan of Sashastra Seema Bal (SSB) was killed and an officer was injured in the area.

The officials said that they suspect that three youth from Banihal’s Kaskoot and Ashar villages who are missing since Wednesday afternoon carried out the attack on the SSB men on duty near Jawahar Tunnel beneath Pirpanjal hills which separate Kashmir Valley from Jammu region. They also said that the mobile phone of one of these youth was found in a bag lying half a kilometre from the site of the sneak attack.

“It is believed that the youth have after carrying out the attack fled towards the surrounding hills and a search operation is underway to capture them,” said a police official.

The SSB officials said that during the attack carried out at around 7.15 pm, the gunmen targeted the force party returning from security duty at the vital tunnel along the Srinagar-Jammu highway. One constable was killed and one Assistant Sub-Inspector was injured in the attack during which the assailants also snatched an INSAS rifle and one AR-41 rifle from the SSB personnel.

They accused the CRPF personnel on duty of opening indiscriminate fire and also using pellet shotguns on pedestrians. The authorities have denied the charge but promised investigation into the incident.

Initial reports had termed the incident as “mysterious” while as the police had said that it could be a case of “fratricide”.

It also said, "The grenade attack, in which three civilians lost their lives while scores other were injured, has been widely condemned”.