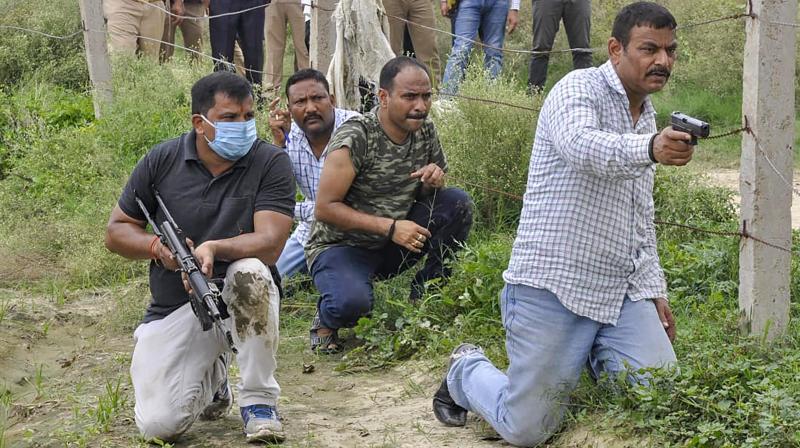 STF and Forensic teams re-enact the events leading to the encounter of slain gangster Vikas Dubey, as part of ongoing investigation of the case, in Kanpur district. PTI photo

Decorated former IPS officer Julio Ribeiro has said the encounter killing of dreaded Uttar Pradesh gangster Vikas Dubey involved the police usurping the role of judiciary and asserted investigators should not be empowered to prosecute and judge criminals.

In an 'open letter' addressed to citizens, the former top cop said the "murder' of a father-son duo in Tuticorin district of Tamil Nadu was disturbing and every policeman in India should hang his head in shame over the incident.

Ribeiro was referring to the case of alleged torture by police which led to the deaths of a father-son duo at Sathankulam in southern Tamil Nadu.

The nonagenarian, who served in Maharashtra, Gujarat and Punjab during his decades-old career in the IPS, said current politicians are of a different breed from the freedom fighters who formulated policy in post-Independent India.

"But the values of honesty, compassion, yearning for truth and justice, commitment to the law and the Constitution are always constant and should hold the first spot in your minds eye whenever you think, decide and finally act," said Ribeiro, a former Mumbai police commissioner who also served as Indian Ambassador to Romania.

He said while tackling crime and criminals, the extraordinary methods of fighting terrorism cannot be replicated in normal times.

"Gang lords and big criminal gangs come into existence because they use money to bribe police officials and their political masters. It is the nexus between the criminals, the police and the politicians that create these Frankensteins!" said Ribeiro, who served as Punjab DGP at the height of militancy in the northern state.

"They may ease you out of your position at the top, but that is a much nobler option than to be privy to the creation of a Vikas Dubey!

"And speaking of Vikas Dubey, his elimination involved usurping the role of the judiciary! The investigators should not be empowered to prosecute and judge also as is happening in the country now!," he said.

Dubey was killed in an encounter on July 10 when a police vehicle carrying him from Ujjain to Kanpur met with an accident and he tried to escape from the spot, the Uttar Pradesh police had said.

The dreaded gangster faced dozens of cases and was on the run after eight policemen were ambushed in Bikru village near Kanpur when they were going to arrest Dubey and fell to bullets fired from rooftops in early July.

"I am sure you will devise a strategy where fake encounters and brutal methods of interrogation are abandoned in favour of not allowing Vikas Dubeys to rise in the first place and in favour of quick trials of the Vikas Dubeys who slip through your net!" said Ribeiro in the open letter.