Rana was released from jail after he tested positive for Covid-19, and then rearrested based on the open request for extradition from India 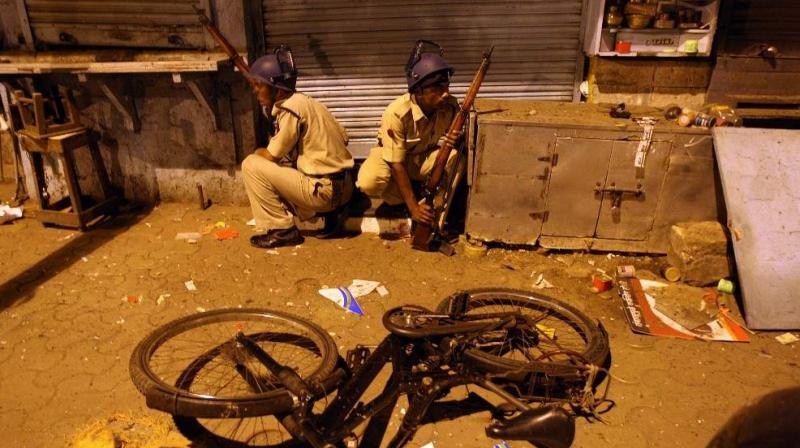 Policemen prepare to take position at the site of an attack in the Colaba area of Mumbai on November 27, 2008. (File Photo: AFP)

Mumbai: Canadian national Tahawwur Rana, a wanted accused in the 2008 Mumbai terror attack case was arrested by the authorities in the United States, based on an open Indian warrant declaring him a fugitive.

Rana (59) was released after he tested positive for Covid-19 however he was placed under arrest on June 10. He had colluded with David Coleman Headley, another key conspirator who along with the Lashkar-e-Taiba executed the terror strikes.

The arrested accused is likely to be extradited to India however there is lack of clarity pertaining to this, officials said. Rana was arrested from Los Angeles and it was later learnt that he was apprehended based on the open request for extradition from India.

Rana (59) is Headley’s childhood friend and he was released on compassionate grounds after allegedly having contracted COVID-19 while serving a 35 years prison sentence.

Special public prosecutor Ujjwal Nikam, who represented the state government in the 26/11 Mumbai terror attack case, on Saturday said that extradition of Rana will throw more light on the activities of the ISI.

“Pakistani-American terrorist David Coleman Headley, during his deposition before a court via video link, had accepted that Rana knew the entire criminal conspiracy of 26/11 Mumbai attack,” Nikam said.

“Headley had also admitted that Rana used to finance him,” he added. According to Nikam, Headley had then made “sensitive revelations” involving the terrorist activities of Lashkar-e Taiba (LET) and their links with ISI.

The Indian government and their American counterparts entered a bilateral Extradition Treaty in 1997. Rana is wanted in India for a number of offences, including the conspiracy to commit murder, criminal conspiracy, forgery and murder as per the Indian Penal Code (IPC).

Rana was produced in a US court on June 11 and a hearing has been scheduled on June 30.

Between 2006 and November 2008, Rana conspired with Headley, also known as Daood Gilani, and others associated with the Pakistan based terror outfit Lashkar-e-Taiba (LeT) and Harakat ul-Jihad-e-Islami (both US-designated terrorist organisations) and hatched the Mumbai terror attacks of 2008.

At least 166 people, including six US nationals, were killed in the terror strikes. Headley, who has been made an approver in the case, is currently serving a 35-year prison term in the US for his role in the attack.