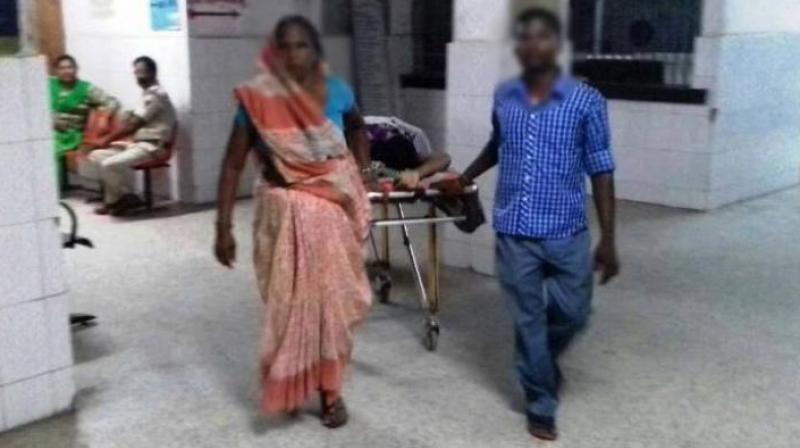 After denying a bed initially, the hospital admitted her and she has been kept under constant observation due to her critical state. (Photo: Twitter/ ANI)

Patna: A minor girl was gangraped in a moving train near Lakhisarai in Bihar. The culprits, after raping her, threw the victim out of the moving train.

The girl was later rushed to a hospital in Patna, where she is being treated. Doctors here said, “Her condition is critical, but we are trying very hard to save her.”

The victim, in her statement to the police, said that she was raped by two of her neighbours when she had gone to answer nature’s call on Friday morning. She was later dragged into a train where around six boys gangraped her and threw her out of the moving train. The girl was rushed to a local hospital after she was found unconscious on the railway tracks. She was later referred to Patna for further treatment.

“When I woke up, I was in the hospital, I recognised two of my neighbours,” she said.

In the last one week, around four girls became victims of attacks, in a major embarrassment for chief minister Nitish Kumar.

On Friday, in Begusarai, two minor sisters were made to walk on the streets half-naked after their father failed to deposit their school fees on time. In another incident on Sunday, a girl was allegedly raped and set on fire at her house in Khagaria district.

According to government sources, the CM has taken cognizance of the matter and has asked officials to act against those who were involved in the gangrape incident.

“One person has already been arrested and search is on to nab others who are absconding. Let me assure everyone that those who were involved in the incident will not be spared”, JD(U) spokesperson Niraj Kumar told this newspaper.