India   Crime  20 May 2017  Kerala: Woman raped by godman for many years, cuts off his genitals
India, Crime

Kerala: Woman raped by godman for many years, cuts off his genitals

After she had committed the act, she called the Thiruvananthapuram police to inform them that she did it as an act of self-defence. 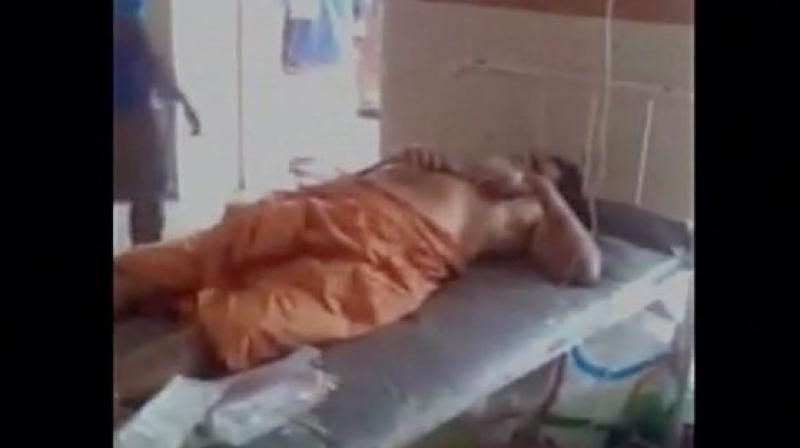 The 54-year-old ‘swami’ had allegedly raped her multiple times since her high school days. (Photo: ANI/Twitter)

Kollam: In an act of self-defence, a 23-year-old woman chopped off a godman's penis on Friday, who had been reportedly assaulting her sexually for several years.

According to a report in The NewsMinute, the accused Sreehari alias Ganeshananda Theerthapada Swami, a 54-year-old ‘swami’ had allegedly raped her multiple times since her high school days.

After she had committed the act, the victim had called the Thiruvananthapuram police to inform them about her assault. She also confessed that she had done so as an act of vengeance and in self-defence to the swami's actions.

The victims’ parents were followers of the Swami who belongs to an ashram in Padmana in Kollam, Kerala.

The report further stated that Swami, who was in a critical condition, was later admitted to the Medical College hospital on Saturday around 12:30 am. The incident reportedly happened on Friday at 11:30 pm, according to the police.

"She knew that no one would believe her if she said she had been sexually assaulted by a man of god. So, this was perhaps the only thing she could think of," the Circle inspector of Pettai station in Thiruvananthapuram said.

While the Medical College said in a press statement that the accused was out of danger, the woman has been taken to a government shelter.

The press statement further was quoted as stating, "A 54-year-old man from Kollam was admitted at 12.39 am to the hospital on Saturday. His penis had been cut (90%) and was hanging precariously. There was no way it could be stitched back. Plastic surgeons, who are urology experts in the hospital, did an emergency surgery to stop the blood loss and to enable him to pass urine."

According to the woman, her mother was well aware of the Swami's acts and he had repeatedly assaulted her at home. Aware of his arrival on Friday night, the victim is said to have kept a knife ready to chop off his genitals.

A case has been filed registered against the swami under IPC section 376 (rape) and under sections of Protection of Children from Sexual Offences Act (POCSO). "Case had been filed under POCSO as the assault and rape seem to have started when she was a minor," police were quoted as saying.

"No case has been registered against the woman. Investigations are still on," a senior police official said.

"It was a courageous step, no doubt about it," Kerala CM Pinarayi Vijayan said after he was told about the incident.

Strangely, the girl's act is eerily similar to a Malayalam movie sequence called 22 Female Kottayam where the heroine apparently castrates the hero for betraying her.