The bus was going to Thiruvananthapuram from Bengaluru, while the lorry was coming from the opposite direction 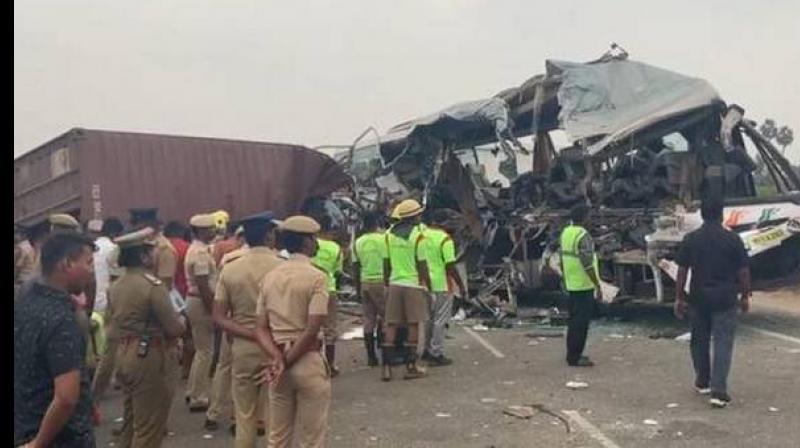 The bus was going to Thiruvananthapuram from Bengaluru, while the lorry was coming from the opposite direction on the Coimbatore-Salem Highway when the mishap occurred at 4.30 am, police said

Of the 48 passengers in the bus, 19 died on the spot and remaining sustained injuries.

Condoling the death of  several people in an accident involving a bus and lorry in Tamil Nadu, Kerala Chief Minister Pinarayi Vijayan on Thursday directed two of his ministerial colleagues to rush to the neighbouring state to coordinate relief operations.

He also directed the Palakkad district collector to take necessary steps to provide medical aid to the injured and bring back the bodies of those from Kerala, the Chief Minister's Office said.

Transport Minister A K Saseendran and Agriculture Minister V S Sunilkumar have been directed to rush to Tamil Nadu to coordinate relief operations, the CMO said.
It said it was in regular touch with Tirupur district administration and efforts were on to identify the bodies.

Nineteen people were killed and several injured seriously when a Kerala State Road Transport Corporation bus collided with a container lorry near Tamil Nadu's Avinashi town in Tirupur district in the early hours on Thursday.

The Kerala government bus was heading to Thiruvananthapuram from Bengaluru on the Coimbatore- Salem highway when the accident occurred.