The Dalit family continued their protest to press for their demands and refused to cremate Ratitam's body even 60 hours after his death. 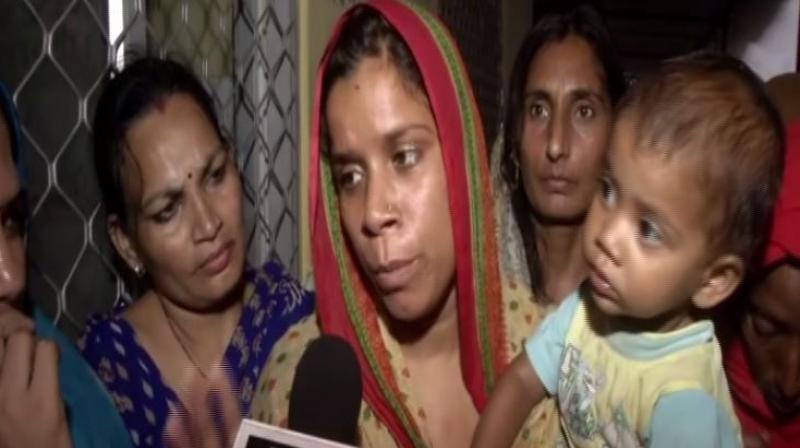 They are agitating with the body of Rekha's father-in-law who the family says consumed poison due to police apathy in the case of his son's death. (Photo: ANI)

Alwar: A month after her husband was allegedly lynched, 27-year-old Rekha and her family members are protesting at a government-run hospital in Alwar district's Tapukada for the last three days. They are agitating with the body of Rekha's father-in-law who the family says consumed poison due to police apathy in the case of his son's death.

Rekha, along with her family members, is demanding action against those accused of allegedly lynching her husband Harish Jatav who was involved in an accident with an old woman on July 16 while he was riding a bike in Mewat area of Alwar.

The family members of the woman had allegedly beaten up Harish brutally which led to his death at Safdarjung Hospital in Delhi.

Harish's wife alleged that the police personnel harassed her father-in-law Ratiram, a blind man, leading him to commit suicide on Thursday night, and demanded action against the responsible cops.

The Dalit family continued their protest to press for their demands and refused to cremate Ratitam's body even 60 hours after his death on Sunday.

They alleged that Harish had received serious head injuries due to the beating, which resulted in his death.

"I have four children and fifth is in my womb. I along with my children will commit suicide if the police do not take immediate action against the responsible police officials and the accused in the case," Rekha said while speaking to ANI.

The family has also demanded Rs 1 crore and five bigha land as compensation and a job for the woman. "I have my children and my mother-in-law to take care of. How will I do that?" she asked.

"We will not cremate the body of my father until our demands are met even if it gets decomposed," Dinesh Jatav, Harish's brother, told ANI.
The police did not nab the accused despite repeated complaints by Harish's family, family members alleged.
A meeting between district administration, family members and local leaders did not obtain any result on Saturday as the family remained stubborn on their compensation demands.

"He (Ratiram) visited the police station several times to pleading with the police to take action against the accused but they did not take any action instead they harassed him. He also received threats from the accused asking him to withdraw the case otherwise he would lose one more son. He consumed poison as he saw no hope ahead," Dinesh said.

Local MLA Sandeep Yadav has alleged that the government is ready for an investigation into Harish's death and also a departmental probe against police officials. The BJP leaders were misleading the family and not letting them cremate the body, Yadav claimed.

"BJP leaders are playing politics in the matter on the directions of senior party leaders. They want to portray the incident as Pehlu Khan lynching case as the accused in the case is Muslim," he told ANI.

The BSP legislator also said that the government was offering a job of an Anganbadi worker to Harish's wife.

BJP MP Mahant Balaknath, who joined the agitating family on Saturday, alleged that the police were not taking action even a month after the incident as "the accused belongs to a particular community".

Alwar Superintendent of police has said that an investigation is underway in the case.

On Sunday, more police personnel were deployed in the town.

An FIR under Section 302 (murder) and other relevant provisions of the Indian Penal Code (IPC) was registered in Harish's murder case. A compensation of Rs 4,12,000 has been given to the family.