Appear before CBI on August 23, says SC to Karti Chidambaram

A bench consisting of Chief Justice J S Khehar allowed Karti to be accompanied by a lawyer at the CBI headquarters during the questioning. 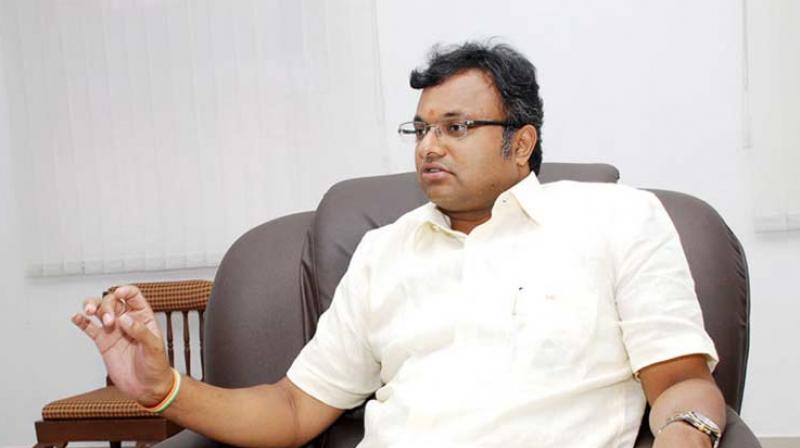 The Supreme Court had on August 14 said that Karti would not be allowed to leave India without subjecting himself to investigation in the corruption case. (Photo: PTI)

New Delhi: The Supreme Court on Friday directed Karti Chidambaram, son of former Union minister P Chidambaram, to appear before investigators at the CBI headquarters in New Delhi on August 23 for questioning in a corruption case.

A bench comprising of Chief Justice J S Khehar and Justice D Y Chandrachud allowed Karti to be accompanied by a lawyer at the CBI headquarters during the questioning.

It gave CBI the liberty to question him for as many days as it wants till August 28, the next date of hearing.

It also asked Karti to carry all necessary documents required to defend himself against the allegations made by the CBI in the FIR. The bench, however, clarified that the accompanying lawyer would sit in an adjoining room to the place where Karti will be quizzed by CBI investigators.

The bench has now posted the matter for consideration on August 28 and asked both parties to file their respective reports with regard to the investigation and other aspects of the case.

The apex court had on August 14 said that Karti would not be allowed to leave India without subjecting himself to investigation in the corruption case. The apex court, which stayed the Madras High Court order putting on hold the look out circular (LOC) issued by the Centre against Karti, had sought to know when he would make his appearance for questioning before the CBI.

The case lodged by the CBI in Delhi is related to alleged irregularities in the Foreign Investment Promotion Board (FIPB) clearance to INX Media for receiving overseas funds to the tune of almost Rs 305 crore in 2007 when Karti's father was the Union Finance Minister.

Read: SC asks Karti to appear before court, prohibits him from travelling abroad

The CBI had claimed that the FDI proposal of the media house, cleared by Chidambaram, was "fallacious". The FIR was registered on May 15 before the special CBI judge in New Delhi and the registration of the case was followed by searches at the residences and offices of Karti and his friends on May 16.