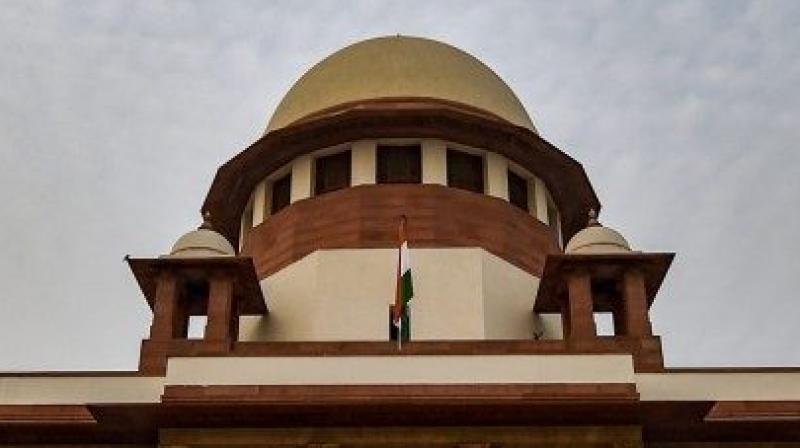 New Delhi: The Supreme Court Friday refused to entertain a fresh plea seeking judicial probe and action against policemen into the alleged lynching of three people, including two seers, in Maharashtra's Palghar district in April.

A bench of Justices Ashok Bhushan, S K Kaul and M R Shah said that with regard to this incident, this court has already taken cognisance. There is no question of multiplying the petitions one by one".

Petitioner in-person Jai Krishna Singh said that in his plea he has also raised concern about the recent extra-judicial killings in the country but the trigger for filing of the present petition was the Palghar incident.

Singh has sought direction to register an FIR against the police officials present at the spot at the time of the killings and arrest them, including the one seen in the TV footage shrugging off the hands of the 70-years-old Sadhu.

He also sought direction to set up a judicial inquiry headed by the retired Supreme Court judge or the retired Chief Justice of any High Court in the alleged killing of the three deceased persons under Kasa police station on April 16, when nationwide lockdown was in force.

Besides, the plea sought setting up of a judicial committee to monitor the trial of the accused persons including the police officials on monthly basis so that justice could be administered swiftly in the case.

On June 11, the top court had sought a response from the Maharashtra government on two petitions seeking separate probes by the CBI and the NIA into the alleged lynching of three people, including two seers, in the state's Palghar district in April.

The top court had agreed to hear the petitions, including the one filed by sadhus of 'Shri Panch Dashban Juna Akhara' and relatives of the deceased seers.

Their plea alleged that the investigation by the state police was being carried out in a biased manner.

The other plea, seeking an NIA probe into the incident, has been filed by Ghanshyam Upadhyay.

Besides the Maharashtra government, one of the petitions has arrayed the Centre, CBI and the director general of police of Maharashtra as respondents in the matter.

The three victims from Kandivali in Mumbai were travelling in a car to attend a funeral at Surat in Gujarat amid the COVID-19 nationwide lockdown when their vehicle was stopped and they were attacked and killed by a mob in Gadchinchile village on the night of April 16 in the presence of police.

The victims were identified as Chikne Maharaj Kalpavrukshagiri, 70, Sushil Giri Maharaj, 35, and Nilesh Telgade, 30, who was driving the vehicle.

While hearing a separate plea seeking a CBI probe in the case, the top court had on May 1 directed the Maharashtra government to submit a status report on the investigation in the matter.

The fresh plea filed by 'sadhus' of 'Shri Panch Dashban Juna Akhara' has sought transfer of the probe to the CBI, claiming that there is "reasonable apprehension of bias" if Maharashtra police proceeds with the investigation.

"Several video clippings have emerged on social media and news reports which very clearly demonstrate the active involvement of the police present, who can be seen handing over the three persons to the unlawful assembly of persons gathered," the plea has claimed.

"The entire incident and its handling raise several questions which remain unanswered till date and as the petitioners apprehend, shall never be answered unless they are investigated by an independent, unsullen and reputed arm of the central agencies," it has said.

It has also sought a direction to the authorities to "favourably decide" the April 28 representations of the petitioner which has sought allotment of land at the site of the killing for setting up a memorial.

Earlier, the counsel appearing for the Maharashtra government had opposed both the petitions saying that similar pleas are already pending before the Bombay High Court.

One of the petitions has also sought a direction to the authorities to pay compensation to the families of the victims.

The police has arrested over 100 people in connection with the case.