A police officer was injured after allegedly being attacked by a tempo driver with a sword. 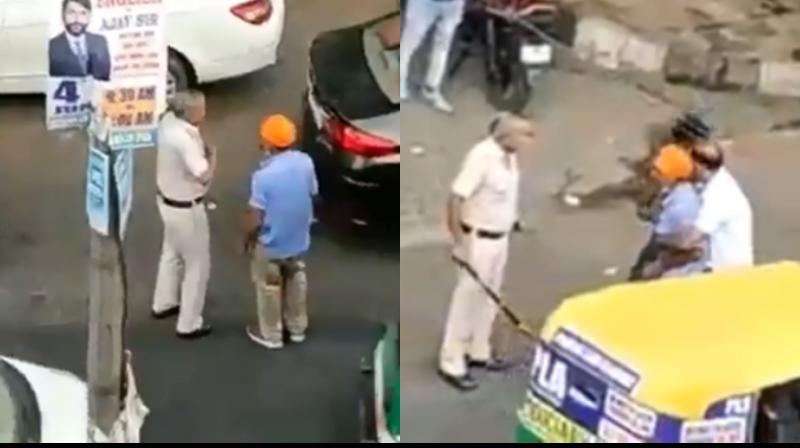 The policemen identified as assistant sub-inspectors Sanjay Malik and Devendra, and constable Pushpendra have been suspended. (Photo: Facebook screengrab)

New Delhi: A group of policemen is seen thrashing a tempo driver who had pulled out a sword in a dramatic video shot by an eyewitness on a busy street in north-west Delhi's Mukherjee Nagar. The incident happened after the police's vehicle and the tempo met with an accident.

The video shot by locals witnessing the incident, shows the cops confronting the man after his vehicle allegedly ran over the foot of one of their colleagues. He then takes out a sword and runs after them.

The police claim that two of their men were injured in the attack. The Gramin Seva driver, however, alleged that he was attacked by the cops first.

"The alleged incident was followed by an accident caused by a Gramin Sewa tempo to a police vehicle. Thereafter, a police officer was also assaulted on the head by the tempo driver with a sword," the police said in a statement. "Further, the tempo was driven dangerously and caused injuries to a policeman in the leg," it said.

Former Delhi Gurdwara Prabandhak Committee president Manjit Singh GK condemned the alleged attack. "Policemen stopped the auto driver and pointed a pistol at him; he was later dragged out of the vehicle and brutally thrashed," said Manjit Singh, ANI reported.

Delhi Police brutality in Mukherjee Nagar is highly condemnanble and unjustified.
I demand an impartial probe into the whole incident & strict action against the guilty.
Protectors of citizens can't be allowed to turn into uncontrolled violent mobsters.

Politicians have stepped into the fray too, calling for justice for the tempo driver. AAP leaders including Delhi CM Arvind Kejriwal to MLA Jagdeep Singh, to BJP’s MLA, Majinder S Sirsa have cried out for justice.

We have got three police officials suspended for their inhumane behaviour. Rest of them will also meet the same fate. Thanking all who came to protest with us.
I have been told @AmitShah Ji has himself ensured action in this regard. 🙏🏻 pic.twitter.com/1VIgxPWVW4

A brutal action done by delhi police where they do not have constitutional right to behave like this with anyone @ArvindKejriwal @msisodia i request to delhi government as well as another concerned authorities to take a very strict action against this case. pic.twitter.com/No1ZBvoyST

Protests broke out after the incident around the city too.

Protests in Delhi after sikh man beaten up by police in Mukherji Nagar area. #Delhi pic.twitter.com/A15JidPyIT