Reacting to the verdict, Ramani said it feels great to have truth validated before the court 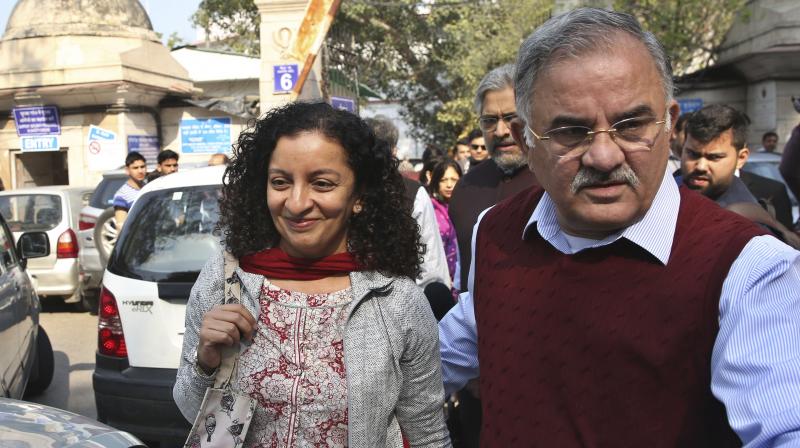 New Delhi: There were tears, hugging and jubilation in and outside the court of additional chief metropolitan magistrate Ravindra Kumar Pandey on Wednesday afternoon when he threw out Rajya Sabha member M.J. Akbar’s criminal defamation case against journalist Priya Ramani, saying the court believed her and that a man’s “the right to reputation cannot be at the cost of dignity” of women.

Acquitting Ms Ramani and accepting her contention that Mr Akbar was not a man of “stellar reputation”, the judgment, read out by Mr Pandey, said even a man of social status can be a sexual harasser.

Acknowledging that there is a culture of sexual harassment in work places by men in positions of power and that women often don’t speak up due to the social stigma attached to sexual abuse, Mr Pandey upheld a woman’s right not to complain.

Noting how sexual harassment often takes place behind closed doors, in secrecy and often the victim herself, despite undergoing a traumatic experience, is not aware of what’s happening, the judgment said, "...society must understand the impact of sexual abuse and harassment on its victims… Woman has the right to put (forth) her grievance even after decades."

Magistrate Pandey’s judgment, which quoted incidents from Hindu epics and scriptures, invoked Sita, Draupadi and Jatayu, has put the wind back in the sails of the MeToo movement that had empowered several women to speak their truth in 2018, but had since been muzzled by men slapping defamation cases and tendentious inquiries by “internal complaints committees” that have, one by one, exonerated men despite mounting evidence against them of sexual abuse and harassment.

Bangalore-based Ms Ramani, who has in the last two years made several trips to Delhi to attend the defamation case trial, was visibly elated and relieved on hearing the judgment. “It feels amazing, truly does. I feel vindicated on behalf of all the women who have ever spoken out against sexual harassment at work place… It was me, the victim, who had to stand up in the court as an accused. I thank everyone who stood by me, especially my witnesses Ghazala Wahab and Niloufer Venkatraman who came to the court and testified on my behalf. I thank the court for the verdict and I thank my lawyer Rebecca John and the amazing team who believed in me and the wider cause. They put their heart and soul in the case," she said.

Mr Akbar, a former editor and Union minister, was present in court with a battery of lawyers and police escort. He left soon after the verdict was read out. He gave no reaction to the verdict.

The court asked Ms Ramani to furnish a bail bond of Rs 10,000 in case an appeal is preferred against the order.

Earlier, when the parties had assembled in court at 2 pm, the judge said, "Please wait outside. There are some corrections in the judgment. It will take half an hour." The presence of women cops in the court led to some anxiety about the order that was reserved on February 10 due to late submissions.

In the wake of the #MeToo movement in 2018, Ms Ramani had written about how, in 1993, Mr Akbar had sexually harassed her when he called her for a job interview to his “bedroom” in Oberoi Hotel at 7 pm.

Mr Akbar filed a criminal defamation case against Ms Ramani on October 15, 2018, and resigned as Union minister on October 17.

Though several women, all of them his former employees, had already come forward to chronicle Mr Akbar’s serial sexual abuse with harrowing personal accounts of sexual harassment and even rape, Mr Akbar chose only to go after Ms Ramani. He also denied all allegations of sexual abuse, in public and under oath in court. His wife, a leading psychoanalyst, too came forward in support of her husband while acknowledging that her husband, then a 43-year-old editor, was having an “affair” with a 23-year-old employee.

Mr Akbar had, in his complaint, contended that Ms Ramani’s allegations were false, malicious and made out of vested interest to malign his reputation. He, however, gave no proof or plausible explanation about how Ms Ramani stood to benefit from talking about the sexual harassment she had suffered.

Ms Ramani has maintained throughout that she was only speaking her truth. She told the court during the trial that saw three judges that her decision to share what had happened in that hotel room in 1993 was in good faith for public good and, while referring to the stories of several women, she contended that Mr Akbar was not a man of “stellar reputation” and that his serial abuse of women who worked for him was an open secret.

Reading out the judgment, Mr Pandey said it is shameful that incidents of crime and violence against women are happening in a country where epics such as Mahabarata and Ramayana were written around the theme of respect for women.

In Mahabharata, the court said, Draupadi questioned the legality of being dragged by Dushasana into the dice hall and appealed for justice to the men who were witnessing her abuse.

In "Valmiki Ramayan”, Mr Pandey said, when Laxman was asked to describe Sita, he said that “he remembers only her feet as he had never looked beyond that".

Referring to the "Aranaya Kand of Ramcharitmanas", the judgment spoke of the Indian tradition of "protecting, respecting and promoting the dignity of women” and mentioned "Jatayu" (a mythical bird), who upon witnessing the abduction of Sita, came swiftly to protect her, losing his life in the process.

Senior advocate Rebecca John, who fought Ms Ramani’s case, arrived at the court after the verdict was delivered and was greeted by loud, emotional clapping. "It was a challenging case,” she said.

"It was very, very difficult. You saw how difficult it was inside court to get your word across… I think, when you fight powerful people and you have only truth on your side, the journey becomes relevant to you personally. So I think this is probably the most important case of my career," Ms John said.