Accused killed the infant and severed her head on a tantrik’s advice. 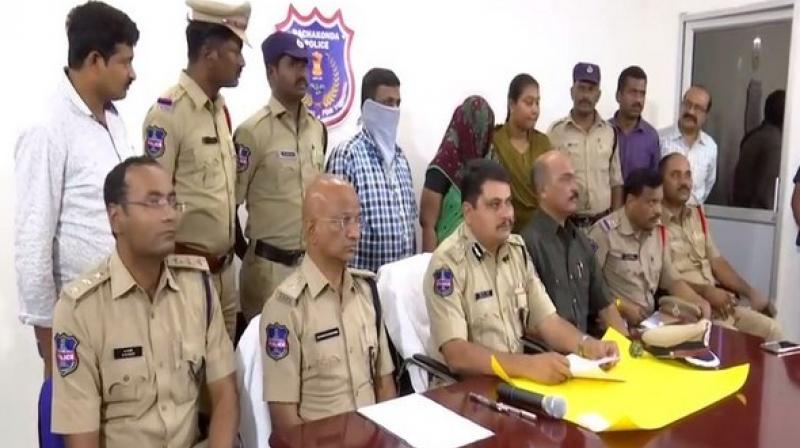 The baby was kidnapped from the roadside in Boyaguda on January 31 night by Rajashekar as he was searching for a female baby to sacrifice. (Photo: ANI)

Hyderabad: Rachakonda police on Thursday arrested one Kerukonda Rajashekar, 40, and his wife, Srilatha, 35, for murdering a baby and throwing away the body into Musi river.

“On February 1, the severed head of a three-month-old infant was found on the terrace of Rajashekar’s house in Chilkanagar,” joint commissioner of police, Rachakonda, Dr Tarun Joshi said.

Locals made a call to the police after Rajashekar’s mother-in-law Verakonda Bala Laxmi noticed the head of a baby girl on the terrace while she went to dry clothes.

The baby’s head was lying on the south-west corner of the terrace. The baby was kidnapped from the roadside in Boyaguda on January 31 night by Rajashekar as he was searching for a female baby to sacrifice.

“His wife was unwell for the past four years and the couple visited one Sammaka Saralamma two years ago in Medaram where they met one Koya Dora who asked them to go for ‘narabali’, (human sacrifice) of a girl child to get rid of evil spirits causing her illness. He then consulted three black magicians regarding the issue,” police commissioner of Rachakonda, Mahesh Bhagwat said.

Rajashekar, who was arrested by Uppal police on Thursday morning, had earlier said that on January 31, they had closed doors around 12.30 am and around 2 pm upon hearing the dogs barking, his sleep was disturbed.

But he said that he went back to sleep again after having some water. However, police officials found substantial evidence which inclined the case towards him.

“A blood stain was found on the floor of their house on February 9, which was collected by the Clues team and was sent for analysis. The results came on Tuesday, confirming that the blood stains found inside the house were matching with that on the terrace,” the official said. Rajashekar was then grilled about the case once again with the latest discovery of blood samples and he confessed of murdering the baby.

For performing the ‘Kshudra Puja’, the couple had sent their two kids to a relative’s place a day before.

On January 31, Rajasekhar took out his car and kidnapped the baby who was sleeping on the roadside with her parents.

“He went there with a knife and a plastic bag, picked up the sleeping baby, along with a feeding bottle, and proceeded towards Musi river in the outskirts of Prathap Singaram. Around 2 am, he mercilessly beheaded the child and flung the body into the river along with the knife and waited for about half-an-hour for the bleeding to stop. He then kept the head in a polythene bag and reached home around 3 am.” the police commissioner of Rachakonda, Mahesh Bhagwat said.

A feeding bottle was also found in Rajashekar’s car, he added. He did the heinous act under the persuasion of his wife Srilatha.

Accordingly, police then picked up his wife from their residence and booked cases against them under Section 302 (murder), 366 (Kidnapping), 201 (Causing disappearance of evidence of offence, or giving false information to screen offender) and 120 B (Criminal conspiracy) of the IPC.