Save Sabarimala: Protests ahead of temple opening, plans to stop women

PS Pillai, BJP’s state president has warned of a bigger agitation if the government fails to resolve the issue in the next 24 hrs. 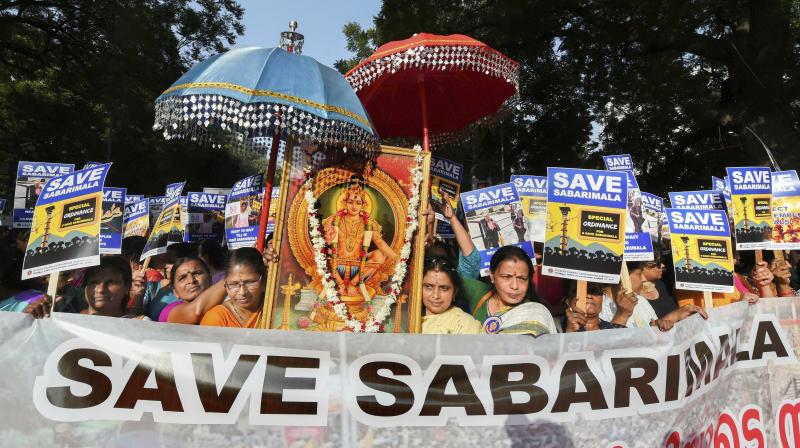 Devotees raised slogans and held pictures of Lord Ayyappa, placards as a part of their 'Save Sabarimala' campaign steered by the state unit of BJP-led NDA. (Photo: PTI)

Thiruvananthapuram: Thousands of devotees of Lord Ayyappa, including women and children, today protested in Kerala’s capital against the Supreme Court verdict allowing the entry of women of all ages into Sabarimala temple.

As the temple complex opens on Wednesday for monthly rituals, the protesters have warned that they will not allow women inside the complex and if needed, they will lie down at the entry point, reported NDTV.

Devotees raised slogans and held pictures of Lord Ayyappa, placards as a part of their “Save Sabarimala” campaign steered by the state unit of BJP-led NDA.

According to reports, the Travancore Devaswom Board, which runs the shrine, will meet the patrons, including the Tantri (head priest) family, Pandalam royals and Ayyappa Seva Sangam on Tuesday to discuss the preparations ahead of three-month-long annual Mandalam-Makaravilakku pilgrim season starting on October 17.

Heavy security has been deployed for the opening of the temple and no special arrangements have been made for women devotees.

Kerala has been witnessing several protests by the state units of Congress and BJP and other Hindu outfits against the verdict. Some of the groups have demanded the state government should come out with an ordinance to stop the entry of women to the shrine.

BJP has alleged that the government is "conspiring" to destroy the hillock shrine.
PS Sreedharan Pillai, BJP’s state president has warned of a bigger agitation if the government fails to resolve the issue in the next 24 hours.

“We will meet each villager in Kerala, and prepare a massive agitation plan to protect the Sabarimala Temple, its centuries-old traditions and sentiments of Lord Ayyappa devotees,” Pillai added.

The temple has traditionally barred all women of menstruating age and the rule followed the belief that menstruating women are “impure”.

On September 28, 2018, in a four-one majority verdict, Supreme Court allowed women to enter the temple.