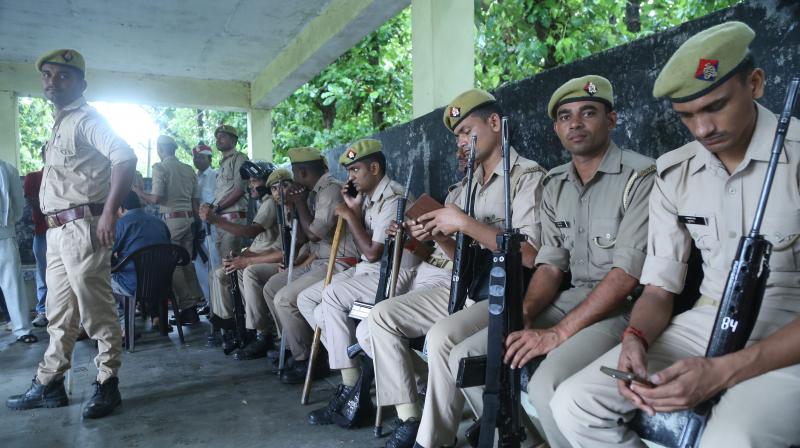 Security personnel outside a mortuary during post-mortem of one of two minor Dalit sisters allegedly raped and murdered in Lakhimpur Kheri, Thursday, Sept. 15, 2022. (PTI Photo)

The girls, aged 15 and 17, were found hanging from a tree in a sugarcane field about a kilometre from their house in the Nighasan police station area on Wednesday.

Junaid and Sohail were allegedly in a relationship with the two sisters, he said.

"According to preliminary investigation, the two sisters left their home on Wednesday afternoon after they were persuaded by Junaid and Sohail. Junaid and Sohail have confessed that they strangulated the girls after raping them," the SP said.

The duo then called Karimuddin and Arif to dispose of their bodies. They later hanged the bodies from a tree to make it look like suicide, Suman said.

An FIR has been registered under sections 302 (murder), 323 (voluntarily causing hurt), 452 (house-trespass after preparation for hurt, assault or wrong­ful restraint), 376 (rape) of the Indian Penal Code and the Protection of Children from Sexual Offences (POCSO) Act, he said.

A post-mortem examination is underway at the district hospital. Everything is being done with the consent of the girls' family members, he said.

The girls' mother had on Wednesday claimed that they were murdered.