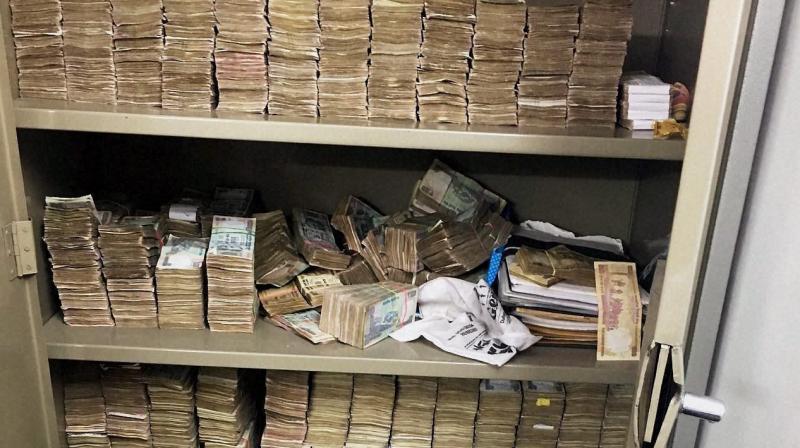 The raid was conducted following a complaint on April 7 by Umesh accusing Bomb Naga of cheating him in a money exchange racket post demonetisation and abducting him. (Representational image)

Bengaluru: In a 12-hour-long search operation during an early morning raid conducted on the residence of former BBMP corporator and rowdy V. Nagaraj alias Bomb Naga on Friday, the city police seized nearly Rs 15 crore in scrapped currency notes of Rs 500 and Rs 1,000 denominations, besides lethal weapons and property documents worth crores.

Before the raid in the morning, the police found it difficult to enter the fortress-like house of Naga in Srirampura. They brought in metal wiring experts to break open the wall-like gates of the house. Naga, who had reportedly slept at home on Thursday night, managed to escape from the terrace, while the cops were busy breaking open the gate. The police have formed special teams to trace him.

The raid was conducted following a complaint on April 7 by Umesh at the Hennur police station, accusing Bomb Naga of cheating him in a money exchange racket post demonetisation and abducting him. But on Thursday, the cops were in shock when they found scrapped currency notes stashed in bags, though the last date to deposit such notes has ended long back.

Umesh stated in his complaint that on March 18, he and his friends Ganesh and Kishore had gone to see a land, while two people, Saravan and Praveen, came in a car and abducted three of them at knifepoint and took them to Naga’s house. They were freed only after they were robbed of Rs 50 lakh and gold ornaments.

The police said that Naga was operating the money exchange racket and striking land deals at his five-storey building. He is wanted in over 45 cases of attempted murder, extortion, kidnapping and money laundering at Srirampura police station.

After the raid, Additional Commissioner of Police (East) Hemant Nimbalkar said that the police seized Rs 14.80 crore in scrapped currency notes from the house. He said that the information will be shared with central agencies, like the income-tax department and Enforcement Directorate.

Naga’s two sons Gandhi and Shastry, who are also rowdies, are missing.