The family of the dead man claimed that one of the accused boys was recently released from jail. 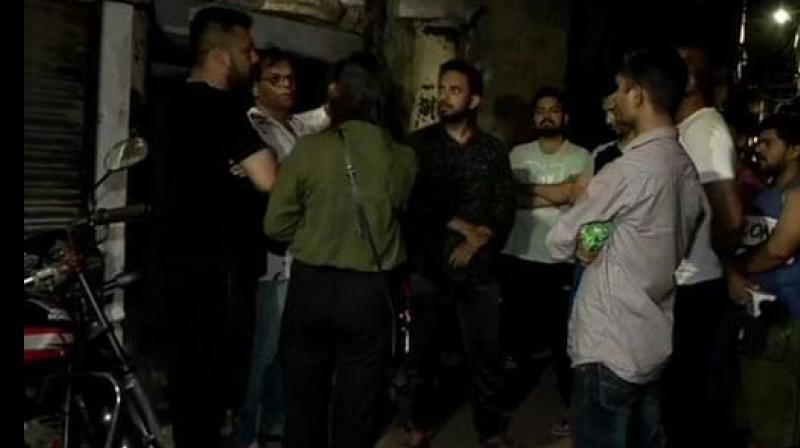 A 52-year-old businessman was stabbed to death allegedly for objecting to lewd comments made by some boys on his daughter in West Delhi's Moti Nagar area, police said on Monday. (Photo: Twitter/ANI)

New Delhi: The daughter of the businessman, who was stabbed to death for protesting against lewd remarks against her confirmed on Tuesday that a fight broke out between her father and the boy which led to his death.

"My father and I were returning from hospital and when a boy made lewd gestures, my father went back to complain to boy's family. Later, a fight broke out and my father was stabbed," she said.

A 52-year-old businessman was stabbed to death allegedly for objecting to lewd comments made by some boys on his daughter in West Delhi's Moti Nagar area, police said on Monday. The man's family members also alleged that locals filmed the incident but did not come to help.

The man's 19-year-old son was also injured in the incident that took place in the early hours of Sunday, they said.

Deputy Commissioner of Police (West) Monika Bhardwaj said a case has been filed and two persons – a 20-year-old man and his 45-year-old father – have been arrested.

Two other sons of the 45-year-old man, who are juveniles, have also been apprehended in connection with the incident, she added.

The boys allegedly made indecent gestures and passed lewd comments on the businessman's 27-year-old daughter when they were returning home on a two-wheeler from a hospital, police said.

The man had taken his daughter to a hospital after she complained of severe headache, they added.

When the man reached there, an argument broke out over the issue between him and the boys, and in the midst of it his son arrived, he said.

"The verbal abuse led to heated arguments. My cousin arrived to control the situation. However, they started thrashing him and my uncle, who also tried to defend themselves. No one was carrying any weapon at that point of time," the family member said.

When the situation went out of control, the boys fled the spot, he said.

The man was attacked and stabbed multiple times, the family member alleged.

When the father-son duo did not return, the family members rushed to the house of the accused.

Hearing the commotion, some people came out of their houses, but none intervened, a family member said, adding that they were recording videos of the incident on their mobile phones instead.

Police said the businessman died because of his injuries on Monday morning, while his son is critical.

The family member who did not wish to be named added that the man received multiple injuries in his abdomen and stomach.

The family of the dead man claimed that one of the accused boys was recently released from jail.

The body was handed over to the family after the autopsy and a report is awaited, police said.

All four accused in the incident have been arrested, said police.