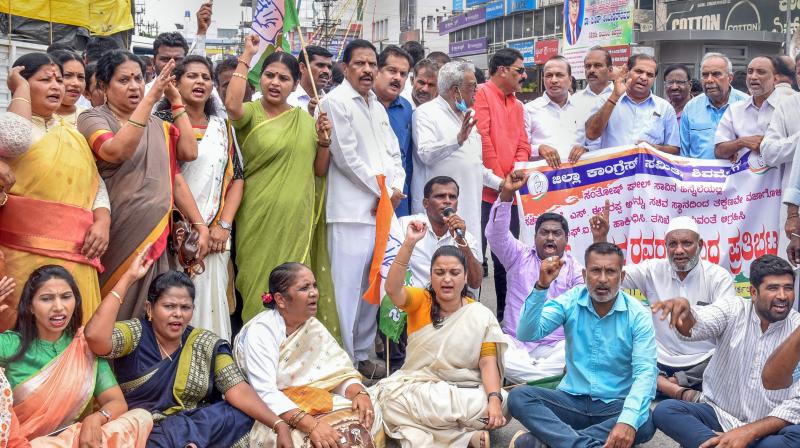 Bengaluru: A first information report has been registered against Karnataka rural development and panchayat raj (RDPR) minister K.S. Eshwarappa for abetment of suicide over the death of a civil contractor in Udupi, the police said Wednesday, adding that Mr Eshwarappa was named as the first accused in the case.

Karnataka chief minister Basavaraj Bommai said he would speak to Mr Eshwarappa personally to find out what had actually happened. In what could mean more trouble for the beleaguered minister, the BJP central leadership will soon take a decision over the allegations of corruption against him.

The FIR was registered on Tuesday night following a complaint from Prashanth Patil, brother of Santhosh Patil, who had levelled the bribery charges against the minister. Santhosh Patil, a civil contractor, was found dead at a lodge in Udupi in a case of suspected suicide on Tuesday.

Mr Eshwarappa, however, has ruled out any resignation, amid mounting calls for him to step down by the Opposition parties. He questioned if a WhatsApp message can be treated as a “death note” and demanded that a probe be held into the “conspiracy” behind Patil’s death. “The question of my resignation does not arise at all. I will not bow to the Opposition demands,” Mr Eshwarappa said in a press conference in his home town.

The complainant contended his brother had undertaken work worth Rs 4 crores in Hindalaga village. He had invested his money in the project and the bill for the work was pending. Santhosh had visited Mr Eshwarappa several times and pleaded with him to release the amount. But his close aides Basavaraj and Ramesh were demanding 40 per cent commission, the complaint alleged.

Speaking to reporters about the case, Mr Bommai said: “An FIR has been filed… I am going to talk to him (Eshwarappa) now, and will collect information from him. Will talk to him on a few things over the phone and will summon him for a one-to-one discussion.”

Mr Bommai reiterated that there will not be any interference in the case and the inquiry will happen in accordance with the law. The CM accused the Opposition Congress of attempting to find fault in the case, and said that the investigation will reveal the truth.

The Congress, meanwhile, stepped up the ante against the BJP over the death of the civil contractor. It said that arresting the minister on murder and corruption charges was the only way to ensure justice.

Former Karnataka chief minister Siddaramaiah along senior Congress leader D.K. Shivakumar and other party leaders submitted a letter to the governor, Mr Thawar Chand Gehlot, demanding sacking of the minister over the contractor’s death. “We will not sit silent on this injustice. Karnataka Congress submitted a memorandum to Hon’ble Governor appealing for the removal of the minister, who must not be allowed to continue in the wake of such grave charges. The law of land must be held supreme -- be it for a minister or the common man,” Mr Shivakumar tweeted.

Demanding the sacking of Mr Eshwarappa, Youth Congress workers on Wednesday took out a march from the Sunehri Bagh circle in New Delhi towards the residence of Union home minister Amit Shah. They raised slogans against “the atmosphere of anarchy” prevailing in Karnataka.