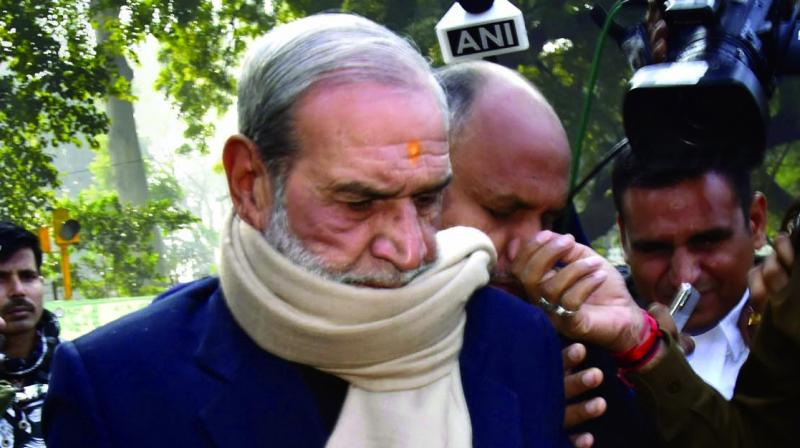 Sajjan Kumar surrendered before a trial court on December 31, 2018 to serve his sentence in accordance with high court's December 17 judgement. (Photo: PTI | File)

New Delhi: The Supreme Court on Monday issued notice to the CBI on former Congress leader Sajjan Kumar's appeal against his conviction in the 1984 anti-Sikh riots case.

Kumar, 73, surrendered before a trial court in New Delhi on December 31, 2018 to serve his sentence in accordance with the high court's December 17 judgement, which sent him to prison for the "remainder of his natural life".

The case in which Kumar was convicted and sentenced relates to the killing of five Sikhs in Delhi Cantonment's Raj Nagar Part-I area of southwest Delhi on November 1-2, 1984 and the burning down of a gurudwara.

The riots broke out after the assassination of the then Prime Minister Indira Gandhi on October 31, 1984, by her two Sikh bodyguards.

Kumar resigned from the Congress after his conviction in the case.

The high court found Kumar guilty of criminal conspiracy and abetment in commission of crimes of murder, promoting enmity between different groups on grounds of religion and doing acts prejudicial to maintenance of communal harmony and defiling and destruction of a gurudwara.

In its judgment, the high court noted that over 2,700 Sikhs were killed in the national capital during the 1984 riots, which it described as "carnage of unbelievable proportions."

It said the riots were a "crime against humanity" perpetrated by those who enjoyed "political patronage" and aided by an "indifferent" law enforcement agency.

The high court set aside the trial court's 2010 verdict, which had acquitted Kumar in the case.