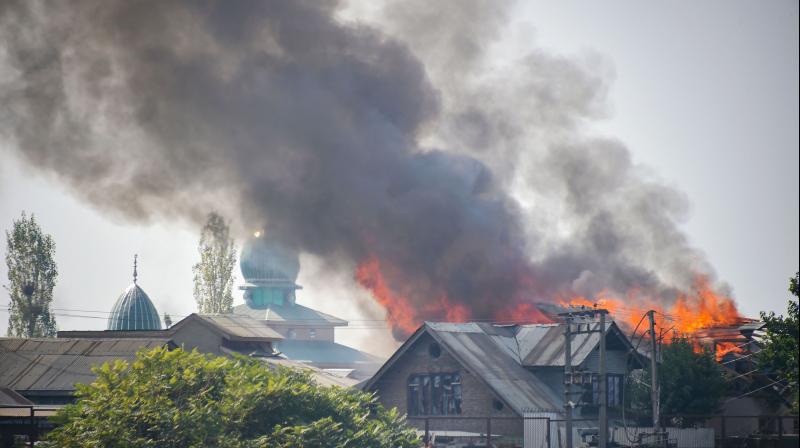 Smoke and flames billow out of a house during an encounter between security forces and militants at old Barzulla in Srinagar. — PTI photo

A Lashkar-e-Tayyaba (LeT) commander from Pakistan and his local associate were gunned down by the security forces in a fire fight that broke out early Monday in Srinagar’s Barzulla area. A private house where the duo had been holed up following the security forces launched a cordon-and-search operation in the area was destroyed as it caught fire in the latter’s final assault.

J&K’s Director General of Police, Dilbag Singh, claimed at a hurriedly called press conference that the slain Pakistan militant commander Saifullah was involved in a series of attacks on security forces including the ambushes that took place in and outside Srinagar past fortnight, leaving several security forces personnel dead and injured. The other militant killed in the encounter has been identified as Irshad Ahmed Dar alias Abu Usama, a resident of southern Pulwama district, “who was active since May 2019 and involved in several civilian killings and attacks on the J&K police and central security forces.”

The police chief said that, so far, this year the security forces have conducted 75 counterinsurgency operations across J&K during which as many as 180 militants including several top commanders of various outfits were killed.

Inspector General of Police (Kashmir range), Vijay Kumar, said that after evacuating the civilians living in the neighbourhood the LeT militants trapped inside a residential house in Mir Mohalla (locality) of old Barzulla were offered to lay down their arms and surrender before the security forces as part of the Standard Operation Procedure (SOP) followed during the actions. But they refused and opened fire on the joint party of J&K police’s Special Operations Group (SOG) and Central Reserve Police Force (CRPF), triggering the encounter, he said and added the operation was launched shortly after midnight on receiving input about the presence of militants in the area.

Mr. Singh said that Saifullah had infiltrated into J&K earlier this year and had during the past two months shifted his base from north to south Kashmir.

He said that all the operations against militants carried out by the security forces, so far, this year were “clean and conducted in a professional manner.” He asserted, “Barring one operation at Batamaloo, Srinagar, in which one woman got killed in a crossfire, all operations were cleanly conducted by the security forces”. He said that eight encounters took place in the Srinagar city alone in which 18 militants including a top Hizb-ul-Mujahideen commander Junaid Ashraf Khan were killed. “Whenever any terrorist outfit tries to establish its base in Srinagar, we successfully corner the militants with the help of our intelligence and other sources,” the DGP said.

Asked how many militants were active in Srinagar at present, the police chief said, “Only one who is involved in a couple of attacks. We will bring him to justice very soon.”

He said that the J&K police lost its 19 men and the CRPF 21 during these operations and attacks of militants whereas 15 Army soldiers were also killed, majority of them along the Line of Control (LoC) during this period.

He also said that the police and other security forces succeeded in bringing back as many as 26 Kashmiri youth who had joined the militants’ ranks and reunited them with their families, so far, this year.