Video: Man beaten up by mob on suspicion of carrying beef in Nagpur; 4 arrested

To a query, he said the police are investigating the incident and trying to find out whether the men were 'cow vigilantes'. 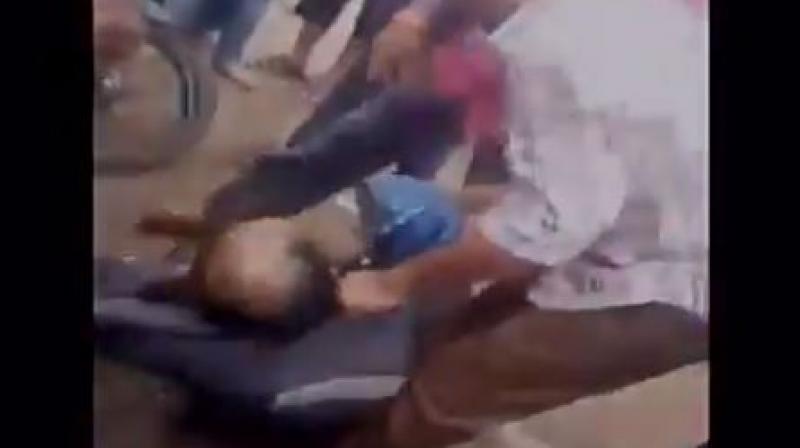 A person was reportedly beaten up by a mob on Wednesday morning on suspicion of carrying beef in Nagpur's Bharsingi village. (Photo: ANI | Twitter)

Nagpur (Maharashtra): A 31-year-old man was allegedly thrashed by a group of persons in Nagpur on Wednesday on the suspicion of carrying beef, a police official said on Thursday.

The police have arrested four persons in this connection.

Salim Ismail Sheikh, a resident of the district's Katol town, was returning home last evening on his bike when 5-6 men apprehended him at a bus stop in Bharsingi village of Nagpur rural, and asked him to get off the two-wheeler.

The men asked him to show the meat he was carrying in the dicky of his bike. When he resisted, the men allegedly thrashed him, Nagpur rural Superintendent of Police Shailesh Balkawade said.

#WATCH: Man beaten up for allegedly carrying beef in Nagpur's Bharsingi, no arrests have been made yet. #Maharashtra (July 12th) pic.twitter.com/JiFAZMfRSS

Sheikh suffered injuries on his face and neck in the attack. He was admitted to a hospital in Nagpur and discharged on Thursday, police sources said.

Following the incident, the victim lodged a complaint against unidentified persons.

The police were able to establish the identity of the accused on the basis of the incident's purported video clip which went viral, an official said.

Two of the accused were arrested Wednesday night and as many others were taken into custody on Thursday morning, the SP said.

Those arrested have been identified as Ashwin Uike (35), Rameshwar Taywade (42), Moreshwar Tandurkar (36) and Jagdish Chaudhari (25), a police official said.

They have been booked under IPC sections 326 (voluntarily causing grievous hurt by dangerous weapons or means) and 34 (acts done by several persons in furtherance of common intention), he said.

The section 326 of IPC attracts a maximum punishment of life imprisonment.

The SP said the meat has been seized and sent to a forensic lab in Nagpur for testing. The report is awaited.

To a query, he said the police are investigating the incident and trying to find out whether the men were 'cow vigilantes'.

The incident is being probed from all angles, he added.