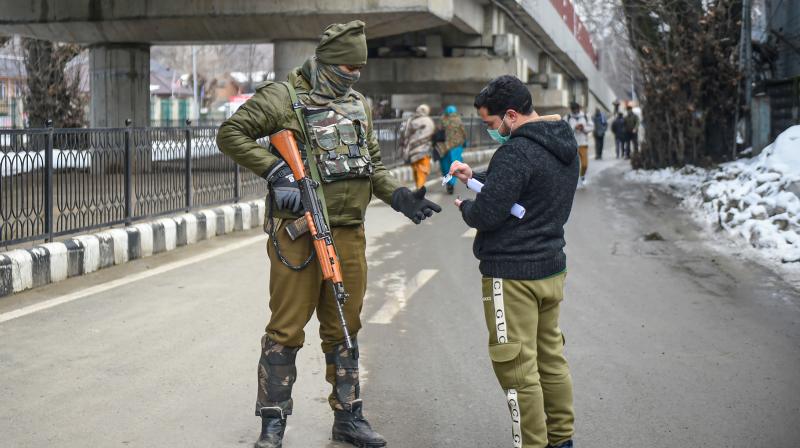 The district administration had earlier announced that shops selling eatables and other essential commodities in Baramulla would instead of 6 am to 11 am remain open from 4.30 pm to 7 pm on Wednesday to enable people to make purchases for Id. — Representational image/PTI

SRINAGAR: A video of a senior government official thrashing citizens in an attempt to enforce the lockdown necessitated by the current wave of the COVID-19 in north-western Baramulla district has shocked people of Jammu and Kashmir and beyond and sparked anger among netizens, many of whom demanded his sacking or, at least, stripping him of the present assignment.

The Additional Deputy Commissioner (ADC) Baramulla, Muhammad Ahsan Mir, can be seen in the video which went viral beating up an elderly woman and man with a stick and even kicking the latter and also threatening another woman resident in the main town of Baramulla for defying the ‘Corona curfew’.

Many people soon took to social media platforms to condemn the ADC’s behaviour and demand action against him. Senior journalist Mufti Islah tweeted “He should get a sack immediately. This is an unruly behaviour. His way of dealing with people will rub on to his subordinates and they are likely to unleash terror on people. He is a very bad example to be a J&K government interface. Isolate him. A bad apple can spoil a basket.”

The official, however, sought to justify what has been widely seen as his misconduct, saying the administration had to play tough as people had by pouring out in huge numbers for Id-eve shopping created “chaos” on the streets and marketplaces of the town a day ago.

Mir also said that he did not use a wooden stick but a maize plant to “discipline” people. “It was extremely soft, used just as a deterrent to make people understand. No one would be hurt,” he claimed.

The district administration had earlier announced that shops selling eatables and other essential commodities in Baramulla would instead of 6 am to 11 am remain open from 4.30 pm to 7 pm on Wednesday to enable people to make purchases for Id.

A similar relaxation given by the district administration of Srinagar on Tuesday was withdrawn as the marketplaces witnessed a huge rush of Id shoppers and brazen violation of Standard Operating Procedures (SOPs) and guidelines for COVID-19 by many people. The resultant traffic jams added to the chaos along the streets of the summer capital. Also, long queues of people at banks and ATMs were seen as a big alarm sign for the customers and bankers by the authorities in view of the worsening COVID-19 situation.

On Wednesday, however, the police enforced curfew-like restrictions in almost all the Valley cities and towns. The J&K police with Central armed police forces at dawn sealed vital roads by laying Concertina barbed wire and erecting other barricades at many places “to stop unnecessary movement of people”. The officials said that only the movement of those engaged in essential services and in cases of emergencies was allowed.

J&K’s eleven districts were brought under ‘corona curfew’ from the evening of April 29 but the restrictions were extended to all the 20 districts the next day. The lockdown would continue till May 17.

Inspector General of Police (Kashmir range), Vijay Kumar, on Wednesday visited various parts of Srinagar to oversee enforcement of the lockdown. He asked the J&K police and Central armed police forces to enforce the ‘corona curfew’ strictly but allow doctors and paramedical staff as well as journalists towards their respective destinations without any difficulty, the officials said.

J&K reported the highest single day spike of 65 corona deaths while 4,352 people were confirmed as fresh positive on Tuesday. Thirty more people had died of the virus till Wednesday noon, taking the toll to 2,877.