Three people were killed in police firing and scores of others wounded, including at least 50 policemen in the violence and arson 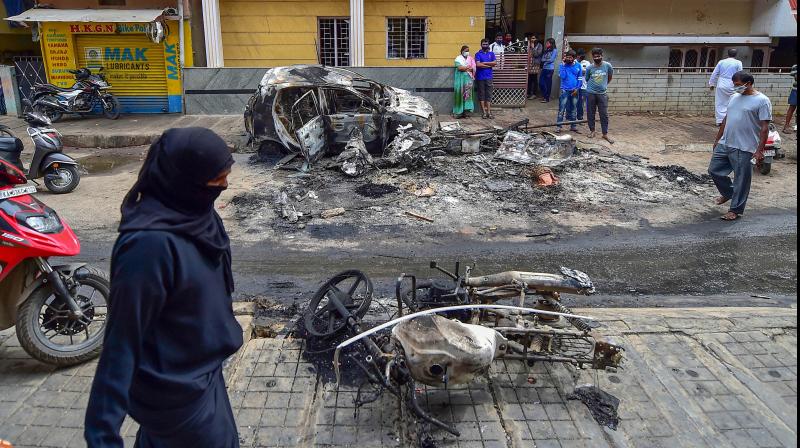 Residents walk past charred remains of vehicles vandalised by a mob over a social media post, allegedly by a relative of a Congress MLA, in Bengaluru. PTI photo

Bengaluru: Areas under Pulakeshinagar assembly constituency here resembled a war zone on Wednesday, hours after after an unruly mob went on a rampage torching vehicles, irked over a 'communally sensitive' social media post allegedly by put up by a relative of a Congress MLA.

Charred vehicles, shards of glass from broken windows, stones and bricks lie strewn over the deserted roads of the violence-affected localities.

Earlier, three people were killed in police firing and scores of others wounded, including at least 50 policemen in the violence and arson that erupted in the city on Tuesday night and continued till the wee hours of Wednesday.

Property of Congress legislator Akhanda Srinivasa Murthy and his family members were targeted after a 'communally sensitive' social media post uploaded online by one of his relatives enraged a section of people.

"We were not at home when all this happened," Jayanthi, the MLA's sister said weeping inconsolably. "The only solace is that my brother and his family are safe," she said.

The violent crowd set on fire police vehicles and barged into DJ Halli police station on the intervening night of Tuesday and Wednesday and damaged the property. Police have arrested about 110 people on charges of rioting.