On being identified on CCTV, search operation was initiated and he was nabbed just as he was boarding flight bound for Bagdogra. 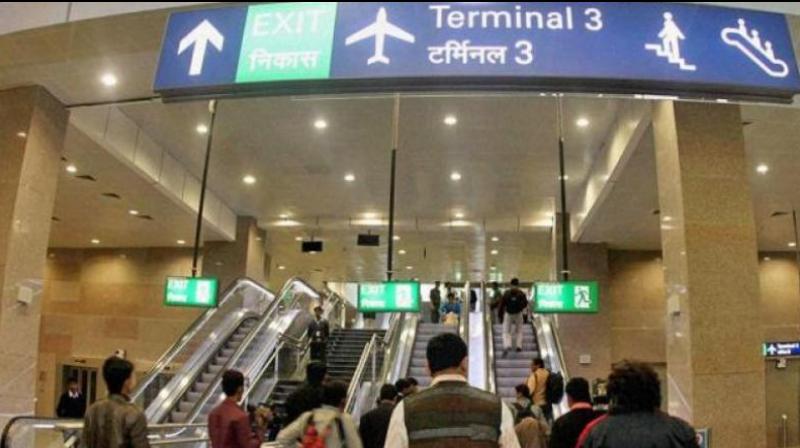 With the objective to make easy money before his was sent away to Bagdogra for his posting, the accused, identified as Naresh Kumar, committed theft at the Indira Gandhi International (IGI) Airport when the woman passenger was waiting for her husband for their flight to Srinagar. (Representational Image | PTI)

New Delhi: An assistant sub-inspector with the Border Security Force (BSF) was on Wednesday arrested for allegedly stealing a woman's handbag containing gold and diamond jewellery worth Rs 15 lakh, at the Delhi airport.

With the objective to make easy money  before his was sent away to Bagdogra for his posting, the accused, identified as Naresh Kumar, committed theft at the Indira Gandhi International (IGI) Airport when the woman passenger was waiting for her husband for their flight to Srinagar, The Times of India reported.

The accused was at the IGI Airport for his flight to Bagdogra.

The woman informed the police that after completing boarding formalities and security checks, she took a seat and kept her handbag under the chair.

Barely five minutes later, she realised that the bag containing ornaments was missing from under her seat. After she was unable to locate the bag in the immediate vicinity, she raised an alarm and alerted the police.

"The complainant was on her way to board a flight to Srinagar, when after completing her boarding formalities, she took a seat and kept her handbag under the chair. Soon, she realised that her bag, which contained gold and diamond, was missing after which she approached the police," said Deputy Commissioner of Police (IGI Airport), Sanjay Bhatia, reported by Times of India.

Following the complainant, CISF and Delhi Police present at the airport scanned the CCTV footage. They spotted Assistant Sub Inspector Naresh Kumar lifting the bag from under the seat of the passenger.

After he was identified on CCTV, a search operation was initiated and Naresh Kumar was nabbed just as he was boarding the flight out of Delhi bound for Bagdogra.

Initially, he denied having stolen the handbag, but the officers found the bag and gold and diamond ornaments worth Rs 15 lakh from his possession, TOI reported.

A case has been launched and the ASI, taken into custody.

Police said initial investigation suggested that the accused wanted to make easy money. The medical examination of Naresh Kumar also confirmed that he was under the influence of alcohol.

Naresh Kumar later told cops that he was hoping to get on his flight before anyone could suspect him of theft.