Kolkata cop opens fire, shoots self and a biker dead

Cop was posted at the Bangladesh Deputy High Commission in Kolkata 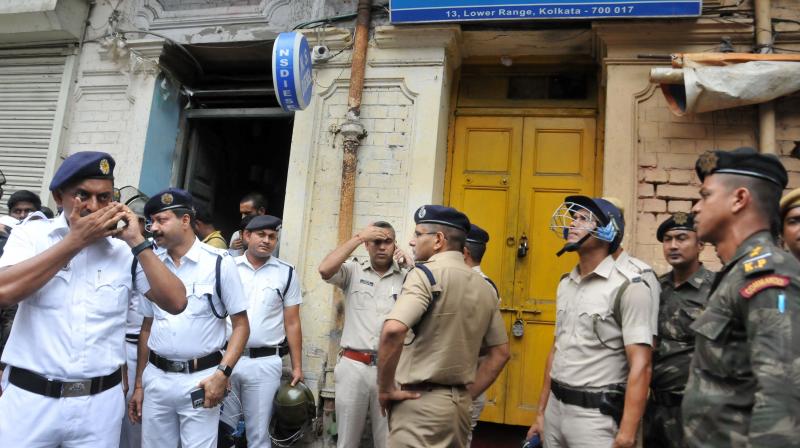 Security personnel at the site after a policeman allegedly fired several rounds outside the Bangladesh Deputy High Commission, in Kolkata, Friday, June 10, 2022. A woman was killed in the firing, before the policeman shot himself. (PTI Photo)

Kolkata: In a shooting spree on Friday afternoon, a young Kolkata police constable, posted at the Bangladesh Deputy High Commission to guard the diplomatic mission in the city, gunned down a passerby and injured two others before killing himself with his automatic service weapon.

After preliminary investigation, the Kolkata police officials said that the constable likely took the extreme step because he was suffering from “depression”.

At around 2.15 pm, Chodup Lepcha, a constable with the city armed police (fifth battalion), suddenly went out of the security outpost of the diplomatic mission on the Circus Avenue at Park Circus in South Kolkata a little after reporting for duty.
Lepcha, a resident of Kalimpong in Darjeeling, had returned from leave on June 9.

According to local residents, the cop, carrying his self-loading rifle (SLR), knocked on their houses, which are located behind the consular office and wanted to know where his colleague was held captive and why.

Surprised by his query, the residents informed him that they did not have any such information. The cop, in his 20s, then walked up to the Lower Range in the vicinity and indiscriminately fired around 15 rounds in five minutes.

Rima Singh, a physiotherapist who was passing through the area while riding pillion on a motorcycle with her colleague, Bashir Alam of Collin Lane, was hit by the bullets. She fell down and died on the spot. The 28-year-old was on her way to her home in Howrah, where her fiancé, had reached to finalise the date of their marriage.