Bragging of his political links, Mohit Yadav, who was said to be in an inebriated state, was also caught on camera hurling abuses at cops. 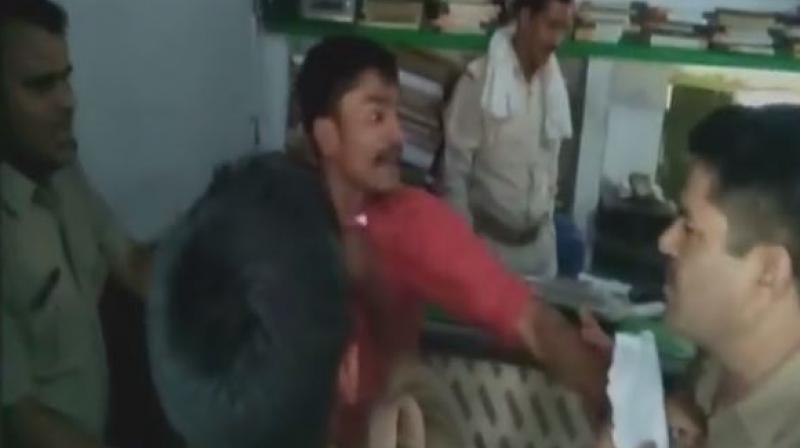 Etah/Lucknow: A nephew of UP legislative council chairman and SP leader Ramesh Yadav today slapped a sub-inspector in a police station in Etah after he was held
for allegedly assaulting hospital staffers who refused to give in to his demand for 'VIP treatment'.

Bragging of his political links, Mohit Yadav, who was said to be in an inebriated state, was also caught on camera hurling abuses at the cops, prompting rival BJP to accuse the Samajwadi Party of suffering from 'hangover' of power.

"Mohit Yadav is my name...," said the 24-year-old, before slapping sub-inspector Jitendra Kumar in Etah. He was immediately arrested and charged with assault and obstructing an official from carrying out his duty.

Three separate FIRs have been registered against Mohit Yadav, Etah Senior Superintendent of Police (SSP) Sathyarth Aniruddha said, adding that they will ensure that the accused gets stringent punishment.

Mohit, who is unemployed, had visited the district hospital with a relative and  'demanded VIP treatment' for an X-ray, refusing to wait for their turn, hospital staff
alleged.

He allegedly assaulted a lab technician and a doctor after which the hospital called in the cops. When he was brought to the police station, he abused Kumar and hit him
before being overpowered.

"It seems he was under the influence of alcohol. He claimed to be the Legislative Council Chairman's nephew and was asking for this and that and misbehaved with the hospital staff. He misbehaved with the police officers too," a senior police officer said.
Distancing himself from his nephew's actions, Ramesh Yadav said, "He will be beaten if he slaps policemen.... I have nothing to do with it."

"I was not there. I am in Lucknow," Yadav said, and even described Mohit as a 'brat'.
Incidents of political leaders and their kin flaunting their links to get their way are not new. Just days earlier, a ruling BJP MLA publicly snubbed a woman IPS officer in Gorakhpur, leaving her in tears. But the ruling party was today quick to target the Samajwadi Party over the incident involving Mohit Yadav.

"They are yet to come out of their hangover. They should realise that gone are the days of Samajwadi Party's hooliganism," BJP spokesperson Shalabhmani Tripathi said. The Samajwadi Party was ousted from power in the recent Assembly elections in Uttar Pradesh.

After a string of incidents under Akhilesh Yadav-led SP government, Prime Minister Narendra Modi had lambasted it for 'failure' to maintain law and order and had even said that "police stations have become Samajwadi Party offices".

The SSP said one case has been registered against Mohit and two others based on a complaint filed by Brahmananda, the lab technician of the district hospital.

Two other FIRs have been filed against him by the Kotwali police station SHO for offences of assault or use criminal force to deter public servant from discharge of his
duty, intentional insult with intent to provoke breach of the peace and voluntarily causing hurt, he said.