The state ATS and Central probe agencies are jointly investigating the case. 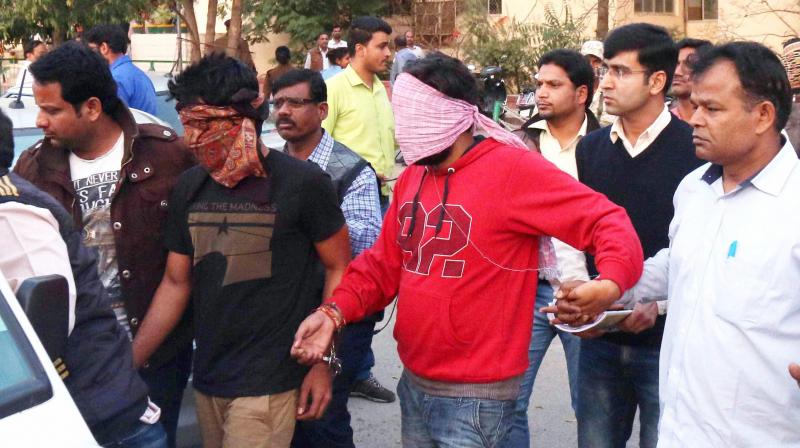 ATS of Madhya Pradesh police officials carrying suspected members of the gang out of eleven allegedly supplying information to Pakistan's spy agency ISI, to produce in the district court in Bhopal. (Photo: PTI)

Among those arrested is a person from Satna, two from Jabalpur, three from Bhopal and five from Gwalior, ATS chief Sanjeev Sami told reporters.

“We arrested a Satna-based man identified as Balram, the kingpin of the espionage ring, following tip-offs by two ISI agents, Satwinder and Dadu,” he said.

“The two ISI agents were arrested from RS Pura in Jammu in November last year on charges of sending strategic information to their handlers in Pakistan. Balram led us to 10 other people involved in the racket,” Mr Sami said.

He said Mr Balram and his associates were operating several parallel telephone exchanges in various cities of MP, including Bhopal, Gwalior, Satna and Jabalpur, and outside the state. They helped ISI handlers keep in touch with agents in India by concealing their identities, Mr Sami said.

“ISI used to deposit money in multiple accounts opened by Balram through hawala. Balram then used to disburse the funds to other members of the espionage ring,” Mr Sami said.

“The ISI men from Pakistan used the facilities to call military personnel in Jammu and Kashmir by posing as senior army officers and take details of strategic operations,” the ATS chief said.

Hundreds of SIM cards have been seized from them. “The role of employees of some telecom firms is under the scanner and more arrests will be made in the coming days,” he said. The state ATS and Central probe agencies are jointly investigating the case.