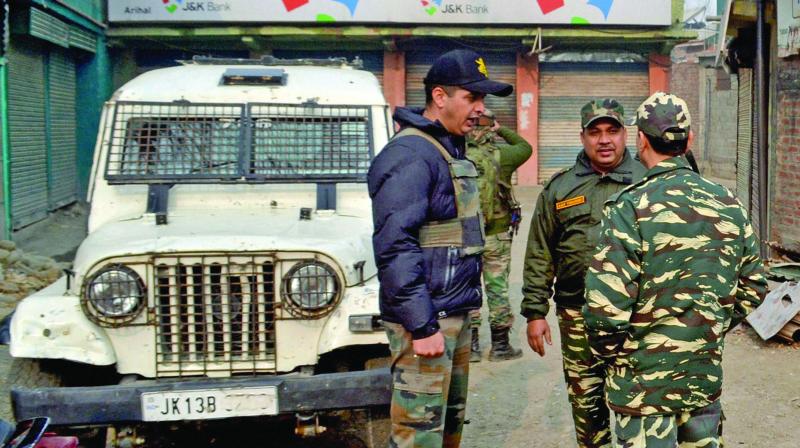 Security personnel outside the J&K Bank branch at Arihal after it was looted on Thursday. (Photo: PTI)

New Delhi: In what appears to be a clear fallout of the demonetisation move hampering terror activities in the Kashmir Valley, suspected militants looted Rs 10lakh from a bank in Pulwama area on Thursday, with the security agencies cautioning the Centre that more such incidents in the coming days can’t be ruled out. With this being the second incident of terror groups targeting banks in the Valley in the last fortnight, the home ministry, acting swiftly, has sought a detailed report on the incident from the state government.

Sources said the ministry has once again reiterated to the state police and other central forces deployed in the Valley to provide foolproof security cover to the banks and vehicles transporting cash to ATMs and banks.

Militants attacked a branch of Jammu and Kashmir Bank in south Kashmir’s Pulwama area and managed to escape with Rs 10lakh after firing several rounds in the air.

Earlier on November 21, in a similar incident, militants had managed to decamp with Rs 13lakh from a bank in Charar-e-Sharief area of central Kashmir’s Budgam district.

Intelligence agencies, in a report to the home ministry, have already informed how the demonetisation drive severely crippled the hawala network, which was the biggest source of funding for terror activities in the Valley. Thus, the terror groups operating in the region are faced with a severe cash crunch, and have started targeting banks.

This trend, sources added, is likely to increase in the days to come, and security agencies have been directed to put in place effective measure to ensure that the militants don’t succeed in their attempts. To their surprise, security agencies recently recovered new Rs 2,000 notes from one of the killed militants on the outskirts of Srinagar following an encounter.

“We have taken the Pulwama incident very seriously and asked security agencies to ensure such incidents are not repeated in future. One of the main objectives of the demonetisation was to crack down on terror funding and circulation of fake currency. But if these incidents continue, the objective would fail,” a senior home ministry official said.

Instructions have also been issued to security forces in Naxal-infested states also to ensure that Maoist groups are not able to convert their old currency through banks or big business groups at gunpoint.

The home ministry has received reports that Naxal outfits in some the state are using force to convert old currency into new Rs 500 and Rs 2,000 notes.