Vikas Dubey's aides killed in encounter in Etawah: UP police

The deceased was identified as Praveen alias Bauwa Dubey, who was wanted in connection with the Kanpur ambush 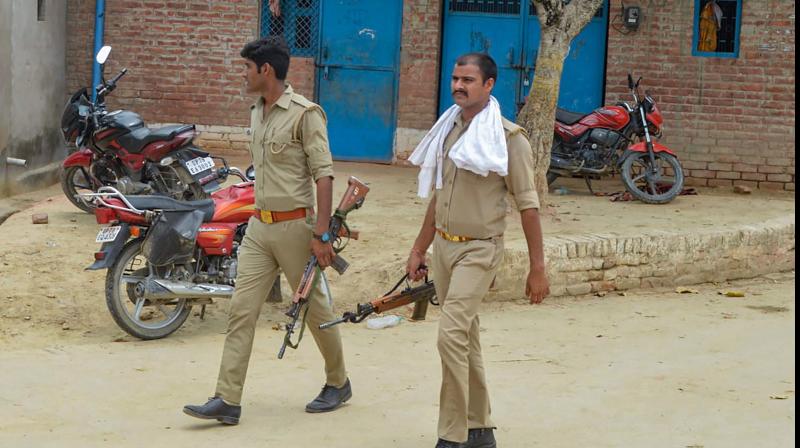 UP cops at the site where 8 poilcemen were killed. PTI photo

While Kartikeya alias Prabhat was gunned down in Kanpur when he tried to flee from police custody, another aide of Vikas Dubey, Praveen alias Bauwa Dubey, was killed in an encounter in Etawah, they added.

Kartikeya, who was arrested from Faridabad on Wednesday, was being brought to Kanpur on transit remand when he snatched the pistol of a policeman and tried to flee, ADG, Law and Order Prashant Kumar said.

"The encounter took place in the Panki area of Kanpur when a police team was bringing Kartikeya alias Prabhat to Kanpur from Faridabad on transit remand. The police vehicle had a flat tyre. Taking advantage of the situation, Kartikeya tried to flee after snatching the pistol of a policeman," he said.

Kartikeya opened fire at the policemen accompanying him, injuring two Special Task Force (STF) personnel, and was killed in the ensuing exchange of fire, the officer said.

The policemen fired at him "in self-defence", he added.

Kartikeya was rushed to the hospital, where he was declared dead by the doctors, the ADG said.

Kartikeya, Ankur and Shravan were arrested following a late-night encounter in Faridabad on Wednesday.

The police had recovered four pistols, including two taken away after last week's ambush in Bikru village in which eight policemen were killed, and 44 live cartridges from the trio.

Meanwhile, another associate of Vikas Dubey, who was wanted in connection with last week's Kanpur ambush, was killed in an encounter in Etawah, the police said.

"The police team surrounded a person at about 4.30 am and he was killed in an exchange of fire. The deceased was identified as Praveen alias Bauwa Dubey, who was wanted in connection with the Kanpur ambush. He was carrying a reward of Rs 50,000 on information leading to his arrest," Etawah Superintendent of Police (SP) Akash Tomar said.

The police seized a rifle and a pistol from his possession.

Eight policemen were ambushed in Bikru village in the Chaubeypur area of Kanpur, where they had gone to arrest Vikas Dubey and fell to bullets fired from rooftops last Friday.

Vikas Dubey, who is carrying a reward of Rs 5 lakh on information leading to his arrest, is still absconding.