On Saturday, the Haryana Railway Police arrested the main accused in the Ballabhgarh train lynching incident from Maharashtra. 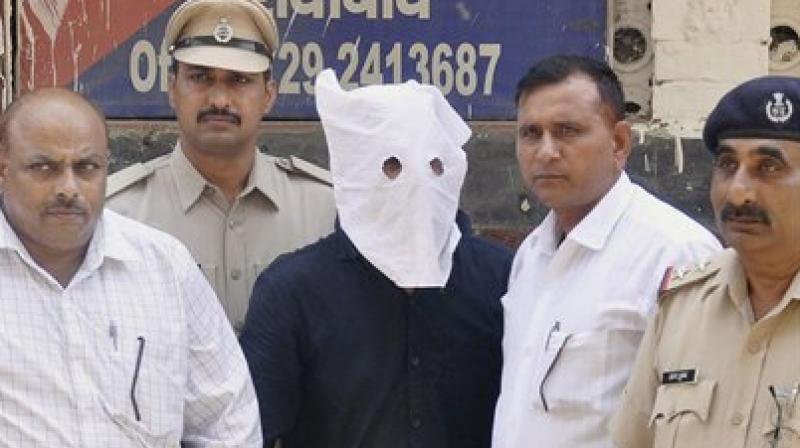 Naresh, the main accused in Junaid Khan lynching case, before being produced in district court Faridabad on Sunday. (Photo: PTI)

Ballabhgarh (Haryana): The family of Junaid, who was lynched to death in a train in Ballabhgarh, demanded death penalty for the accused on Sunday.

"I appeal the government to announce death penalty for the accused and arrest the remaining involved in this case. Such incidents are happening everyday in every parts of the nation. We are living in fear," Junaid's father Jalaluddin told ANI.

Junaid's brother Shakir, who was also attacked during the incident said, that the family appreciates the work done by the police to arrest the main accused.

"I appreciate and want to thank police for their efforts to arrest the main accused and others involved in this case. The whole nation is in an atmosphere of fear due to lynching of any caste or religion," Shakir said.

Yesterday, the Haryana Railway Police arrested the main accused in the Ballabhgarh train lynching incident from Maharashtra's Dhule district, and the police appeared the accused before the court today.

The identity of the suspect has been kept as secret owing to legal reasons.

On June 22, Junaid Khan was allegedly lynched by unidentified persons on a local train while travelling from Ghaziabad to Mathura.

The incident took place when Junaid along with his brothers were returning to their village on Haryana after going to shop for Eid in Delhi.

Haseeb, Junaid's brother, said his skull cap was pulled off and his beard was tugged while the mob hurled abuses at them and were called "beef-eaters".