The Class 2 student was found with his throat slit in a washroom in the school building in Sohna area in Gurgaon around 8:30 am. 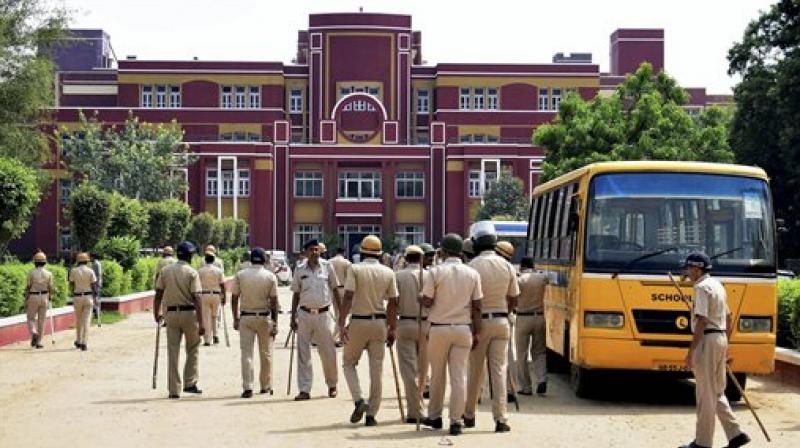 Police team arrive to investigate after the murder of a 2nd grade student of Ryan International School in Gurugram. (Photo: AP)

Ten persons, including a gardener, conductors and drivers, were detained for the murder, police had said.

Police added that the killer attempted to sexually abuse the boy, as well.

The Class 2 student was found with his throat slit in a washroom in the school building in Sohna area in Gurgaon around 8:30 am.

"We have detained 10 people, including a gardener and drivers and conductors. We have been investigating their role since early morning," said Sumit Kuhar, DCP Crime, Gurgaon.

All 10 are being questioned in connection with the incident, officials said.

Some students had found Pradhuman Thakur lying in a pool of blood in the washroom.

"The students alerted the teachers and the school management then informed police, who rushed him to Artemis Hospital. He was declared brought dead by doctors," Ravinder Kumar, PRO Gurgaon Police, said.

The boy's father Varun Thakur, who works as a quality manager with Orient Craft in Gurgaon, accused the school administration of negligence.

"They told me his health deteriorated suddenly. They did not take care of my son. He could have been saved if he had been taken to hospital in time," he said.

"I dropped him today at around 7:30 am. He was happy," the grieving father said.