As he failed in all attempts in securing a job with high income, Razvi thought of earning money allegedly through wrongful means. 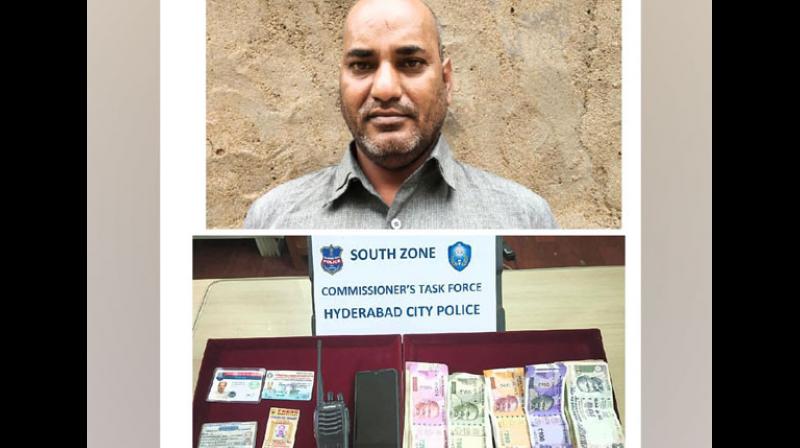 Hyderabad Police have nabbed a 43-year-old man for posing as a police officer with the help of fake ID cards and cheating people on the pretext of offering them a job in the police department. (Photo: ANI)

Hyderabad: Hyderabad Police have nabbed a 43-year-old man for posing as a police officer with the help of fake ID cards and cheating people on the pretext of offering them a job in the police department.

On August 7, the sleuths of Commissioner's Task Force, South Zone Team, along with Hussainialam Police apprehended the person, identified as Syed Tanveer Hussain Razvi, a native of Hyderabad. He was posing as a police officer and cheated many people on the pretext of securing them jobs in the police department.

The police have seized ID cards of the police department, press and International Human Rights Association from his possession along with a Walkie Talkie, mobile phone and cash of Rs 85,000.

Initially, to eke out a livelihood for his family, Razvi took up the job of a turner, which was his family business. As the income through his job was not sufficient to feed his family and lead a lavish life, he worked as a driver and security officer for better earnings.

In 2014, he applied for the post of Home Guard (Driver), but could not succeed. All through the years, the accused kept on changing his profession to improve earnings to meet family expenses.

As he failed in all attempts in securing a job with high income, Razvi thought of earning money allegedly through wrongful means and planned to pose himself as a police officer and dupe people. To make people believe, he used to wear safari and carry walkie talkie. He had also downloaded Police Radio App in his mobile phone, which emits sounds similar to a walkie talkie and a police siren.

The accused posed himself as Assistant Sub-Inspector of police at Task Force and CCS and Police Constable attached to Central Zone DCP Office, Task Force and collected money varying from Rs 1 lakh - Rs 3 lakhs by fooling people of promising them of providing jobs as a constable and home guard in the police department.

He has also collected money by fooling people of helping them to get vehicles at cheaper rates during police auction.

Even his wife and children know of him as an employee in the police department. To maintain social status and respect in the society, he introduced himself as a journalist of an Urdu Daily and president of the International Human Rights Association.

Five cases have been registered against him in Hyderabad and Cyberabad Commissionerates. He has been taken to Hussainialam Station House Officer (SHO) for further investigation.