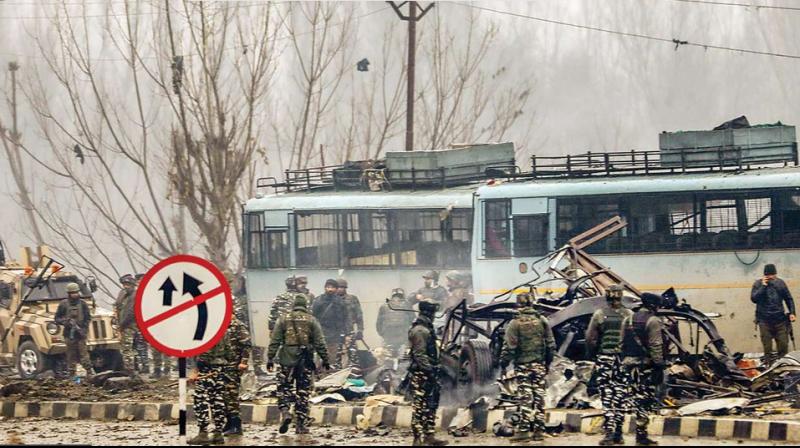 Srinagar : National Investigation Agency (NIA) said on Tuesday that it has formally arrested one more accused in the February 14, 2019 Pulwama terror attack in which more than forty of the Central Reserve Police Force (CRPF) jawans were killed.

The investigating agency in a statement said that the arrested person Bilal Ahmed Kuchay, a resident of Pulwama’s Hajibal, Kakapora area was produced in a special NIA court in winter capital Jammu which sent him into its remand for ten days. He is the seventh person arrested by the NIA in this case, so far.

According to the NIA, Kuchay, the owner of a sawmill is a “terror associate” who “harboured” and “extended logistic support” to the Jash-e-Muhammad (JeM) militants involved in the Pulwama attack.. It claimed that the main perpetrators in the case had stayed in his house and that he further introduced them to other Over Ground Workers (OWGs) who provided safe houses during their stay and planned the attack.

The NIA also said that Kuchay provided the JeM militants with high-end mobile phones which were used by them to communicate with the outfit’s Pakistan-based leadership as well as among themselves for giving final touches to their planning and for execution of the attack.

Further, the mobile phone provided by him was also used for recording the video clip of Adil Ahmed Dar alias ‘Waqas Commando’, an alleged  JeM cadre, who rammed an explosive laden Maruti Eeco into a bus which was part of a convoy of the CRPF at Lethapora in Pulwama district, killing and maiming security personnel on board. The short video went viral after the attack.

The NIA had in March this year taken a local resident Peer Tariq Ahmed Shah and his daughter 26-year-old Insha Jan into custody for their alleged role in the Pulwama terror attack. The NIA sources had said that the father-daughter duo was arrested after the sensational revelation by another accused Shakir Bashir Magray that it was allegedly at Shah’s house in Pulwama’s Hakripora village that the JeM hatched conspiracy to carry out the suicide attack.

22-year-old Magray, a furniture shop owner and resident of Hajibal village of Pulwama's Kakapora area, was arrested by the NIA earlier. He too was accused by NIA of providing shelter and other logistical assistance to Adil Dar. The NIA had said that Magray was introduced to Adil Dar in mid 2018 by Pakistani militant Muhammad Umar Farooq after which he became a full-time OGW of the JeM.

The Pulwama terror attack was initially probed by the J&K police in close partnership with the CRPF, the Army and other security forces and agencies. However, the case was soon handed over to the NIA for investigation by the Union Home Ministry.

The NIA, the sources had said, found some “new and useful” clues after taking the custody of Sameer Ahmed Dar, a resident of Pulwama’s Kakapora, who was arrested by the J&K police along with two others on January 31 on charge of ferrying Pakistani militants to the Valley from Kathua district in Jammu region of the UT. He is a cousin of Adil Dar.

Three suspected Jaish militants-all said to be Pakistani nationals-were travelling in a truck being driven by Sameer Dar. They were, however, shot dead by the security forces as they were attempting to enter the Valley after reportedly sneaking into J&K from across the border at Hiranagar, 56-km east of winter capital Jammu, in an encounter at Nagrota along the Jammu-Srinagar highway. End it.