JCCI president Rakesh Gupta said if the government fails to deport the refugees, it would launch an “kill” campaign against them. 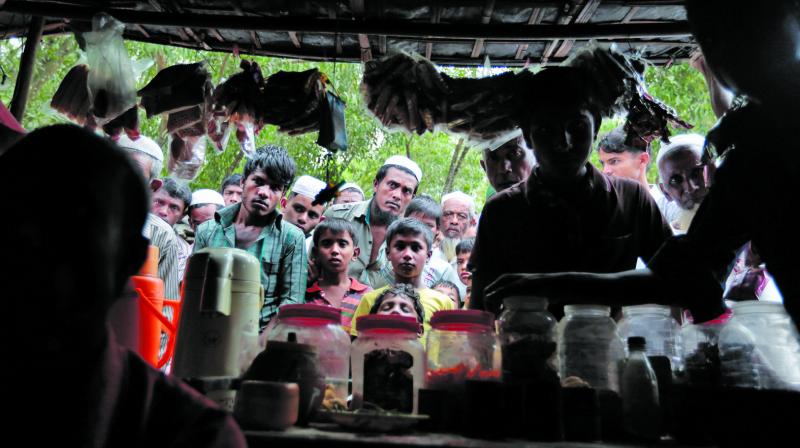 Srinagar: Jammu and Kashmir has been clouded by a new controversy which is fraught with dangerous ramifications and could generate mistrust and hate between its Hindu-majority Jammu and Muslim-majority Kashmir Valley regions.

Jammu Chamber of Commerce and Industry (JCCI) president Rakesh Gupta on Friday told a press conference in the winter capital that if the government fails to deport all Rohingya Muslims of Myanmar and Bangladeshi nationals from Jammu within one month and book the people on whose land these foreigners have settled under the State’s stringer Public Safety Act (PSA), it would launch an “identify and kill” campaign against them.

He said there was no wrong in taking such action against these people as they were involved in drug trafficking and other criminal and anti-social activities.

He claimed that the threat perception from these Bangladeshis and Rohingyas “who are criminals” has been increasing.

He said, “These settlers are criminals and drug traffickers, who were disowned by their own country and we seek their deportation because the JCCI is committed to protect the interests of the people at large in the State as a part of social corporate responsibility”.

He added that neither the J&K government is signatory to any United Nation’s treaty nor Article 370 allows illegal foreign settlers for any permanent settlement in the State.

Earlier Gupta had said the presence of these refugees in Jammu was part of a “sinister campaign” by “unseen forces” to change the demography of the region by settling a Muslim population from foreign lands.

But it is his “identify and kill” threat that has evoked sharp reaction and condemnation by the political, social and trade organizations in the Valley. They have alleged that these Bangladeshi and Rohingya refugees are being condemned in such fashion and even threats openly issued to them on false and fabricated grounds “only because they are Muslims.”

Asked Muhammad Yasin Khan, the chairman of Srinagar-based Kashmir Economic Alliance, “How can you use words like ‘identify and kill’ in a civilized society and what is stopping the government to file an FIR into this irresponsible statement which has come from a reputed organisation of Jammu Inc?”

He said if JCCI feels unsafe because of few thousands Rohingya and Bangladeshi Muslims, why it was silent over the issue of West Pakistan refugees.

Kashmir Chamber of Commerce and Industry (KCCI) while condemning the "vigilantism" of JCCI and its president said the "identify and kill" policy should apply to the West Pakistan refugees as well.

"KCCI strongly condemns the statement made by the president of JCCI wherein he threatened to identify, catch and kill Rohingya refugees in Jammu. The statement is uncalled for, irresponsible and divisive." It added, "The KCCI warns that same could be applicable to the West Pakistan refugees as well. Instead of involving itself in activities beneficial for the trade and commerce, JCCI has taken upon itself the role of vigilantalism”.

It urged the JCCI to immediately withdraw the statement or “ready to face consequences."

Identical statements have been issued by several other organisations in the Valley. Independent MLA and leader of regional Awami Itehad Party (AIP) Sheikh (Engineer) Abdur Rashid on Saturday filed a complaint in Srinagar’s Raj Bagh police station seeking registering an FIR against various office bearers of the JCCI including its president Gupta. The complaint seeks action “as warranted under criminal law against JCCI for spreading terror and threatening peace of Jammu province”.

Rashid said, “The harsh language and death threats given by JCCI office bearers to Rohingya Muslims is yet again a strong evidence to believe that the state administration has nothing in its control and law of the land is subservient to these communal and radical forces”. He alleged that the threat to Rohingya and Bangladeshi refugees is actually part of “a deep conspiracy to create communal tension in Jammu region with well crafted goal”.

He warned the government of “dire consequences” if “communal forces” including office bearers of JCCI are not arrested and taken to task. He also alleged that Rohingya refugees are being harassed for only being Muslims. “If their being non-state subjects matters so much to these communal forces why should not they demand expulsion of (erstwhile) West Pakistan refugees and those thousands living in temporary shelters in Kashmir during springs and summers and also those thousands of families illegally settled in Jammu,” he asked.

But Gupta defended himself and said that it won’t be an offence to deal sternly with “such criminals and drug traffickers” as they have illegally come to Jammu. “It is high time that the people at large should also shoulder and share responsibility of the security forces and deal with these people as the situation demands.”

He also said that the JCCI is aware of the fact that Jammu’s district administration has initiated the process to identify the settlers and the Union Home Ministry too has asked for details from the State government on the issue “but we feel that is not enough to deal with the looming threat and we will not take it lying down till they are deported.”

Government sources said that there are 5,817 registered Rohingya and Bangladeshi nationals often referred to as ‘Bihari Muslims’ in Jammu region. However, local groups on the basis of the number of juggies they live in believe their number has crossed 10,000 mark.

A Jammu lawyer Hunar Gupta who is a member of the BJP’s legal cell and standing council for the Central government recently filed a Public Interest Litigation (PIL) before the J&K High Court seeking identification and deportation of Rohingya and Bangladeshi Muslims from Jammu.

While senior advocate Sunil Sethi who is also chief spokesman of the BJP in J&K is appearing in the PIL along with Gupta, two other lawyers Shah Faisal and Fidel Sebastian have moved an application before the court, pleading that they be heard before an order is passed in the PIL which also seeks directions to the government for shifting all “illegal” immigrants of Myanmar and Bangladesh to any other state as no refugee camp has ever been declared either by the state of the UN in Jammu and Kashmir.