All three occupants were critically injured and shifted to Guwahati where their condition was reported stable, Sadhu said. 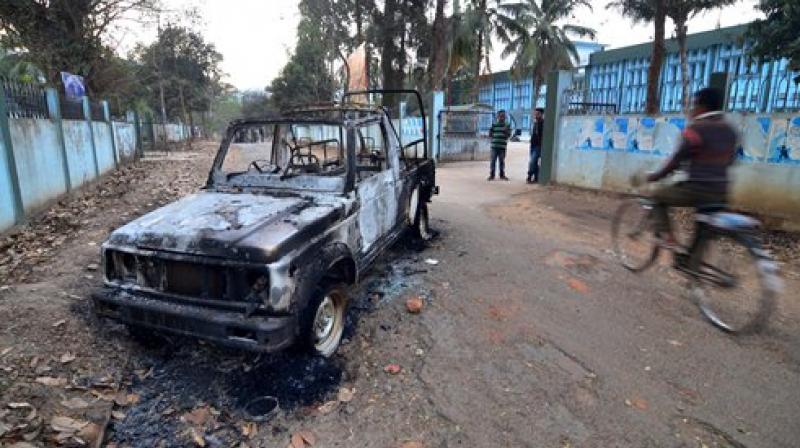 A burnt out Meghalaya Police vehicle is seen in front of community health centre. (Photo: PTI)

Shillong: Three persons were injured in alleged police firing that led a mob to torch a police station and five vehicles at Resubelpara in Meghalaya’s North Garo Hills district, the police said Tuesday.

The three persons, while they were returning from a weekly market, were fired at by the police after the vehicle they were travelling in did not stop at a police check point Monday night, deputy commissioner S.C. Sadhu said.

All three occupants were critically injured and shifted to Guwahati where their condition was reported stable, he said.

As the news spread, a mob set afire the local police station, five police vehicles and a makeshift shelter for police guards within the premises, he said.

While the police maintained that the occupants were asked to stop at the first and second check points, their refusal led the policemen at the last layer to fire at them suspecting them to be armed militants.

District SP Dalton Marak said, “We had information about William Sangma (who had earlier evaded arrest by running away in a vehicle which was asked to stop) and had duly set up a checkpoint, close to the Belpara Baptist Church. However, at about 10:30, whean we asked the vehicle to stop, it refused to do so”.