B'desh man convicted of raping nun in WB convent, 4 others guilty of dacoity 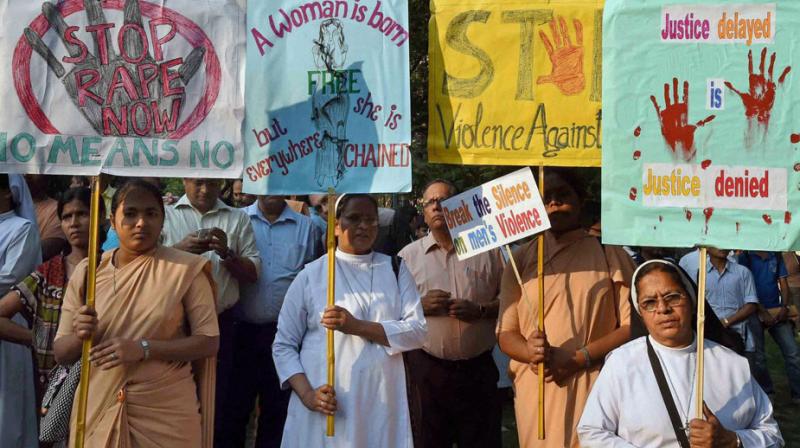 Nuns take part in a rally in Kolkata on Monday to protest against the rape of 71-year-old nun. (Photo: PTI)

Kolkata: A city court on Tuesday convicted a Bangladeshi man for raping a septuagenarian nun in West Bengal's Ranaghat town during a dacoity at a convent in 2015.

Additional Sessions Judge Kumkum Sinha termed the incident as a matter of shame in a state where Sister Nivedita and Mother Teresa had worked for the people.

The quantum of punishment will be pronounced on Wednesday.

Noting that the charge of gangrape was not established, the judge said only Nazrul Islam was found guilty of rape.

Five accused, including Nazrul Islam, were found guilty of dacoity at the convent. A sixth person -- Gopal Sarkar was found guilty of harbouring the five criminals at his residence.

All the six were also found guilty of criminal conspiracy for committing dacoity at the convent in Ranaghat, an otherwise quiet town about 80 km from here, in Nadia district bordering Bangladesh.

Apart from Gopal Sarkar, the five others are Bangladeshis and cases against them under Foreigners' Act are pending before another court.

They had decamped with cash from the safe of the convent.  One accused is absconding.

The trial was shifted from a court in Ranaghat to the Kolkata Sessions court in May 2016 by the Calcutta High Court on a petition by the nun.

The prosecution charged all the accused with gangrape, dacoity and criminal conspiracy among others.