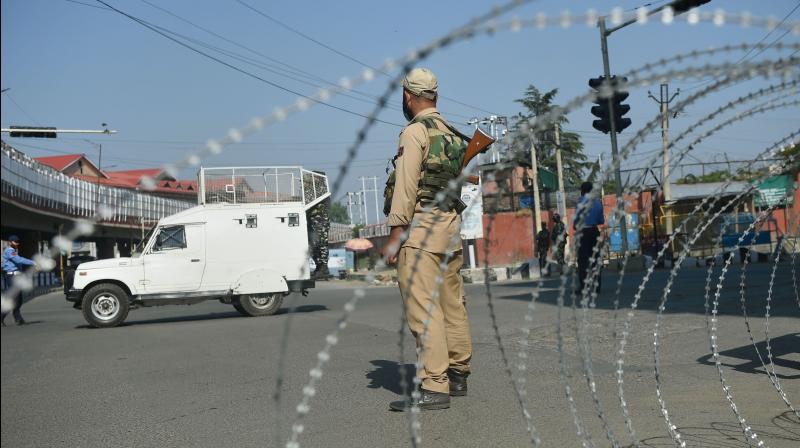 CRPF vehicles stationed at Lal Chowk on the first day of the two-day curfew in Srinagar. PTI photo

The killing of a village-head associated with Bharatiya Janata Party (BJP) in southern Kulgam district by suspected militants earlier during the day on Thursday triggered a new wave of resignations by party activists in restive Kashmir Valley.

At least, half a dozen BJP workers took to social media platforms to announce their disassociation from the party and some of them even seeking forgiveness from militants.

The police said that at about 9.30 am militants shot and critically wounded BJP sarpanch Sajad Ahmad Khanday in Vesoo village of Qazigund area in Kulgam. “He was immediately evacuated to Anantnag’s Government Medical College (GMC) hospital where he succumbed to his injuries,” the police said. The hospital Medical Superintendent, Dr. Muhammad Iqbal Sofi, however, said that Mr. Khanday was brought dead to the hospital.

The police said that the slain sarpanch had been in view of threat to his life from militants provided accommodation in a “secured camp” set up for Kashmiri Pandit migrants at Vesoo “but today he went to his (native) house without informing the police”.

On the August 4 evening, a BJP Panch Arif Ahmad was critically wounded after militants fired upon him in nearby Akhran village.

The two incidents have caused panic among the BJP activists and supporters in the entire south Kashmir region. While half a dozen of them have already announced their resignations from the party, many others have gone underground to evade physical harm coming to them from militants, the reports received here said.

On Thursday evening, a BJP sarpanch Muhammad Iqbal from Chandan Pajan area of Devsar (Kulgam) uploaded a video on social media announcing his resignation. “We don’t want to die and we haven’t earned anything. I have nothing to do with BJP and I resign,” he says in the purported video.

Another party office-bearer of Anantnag district Rafiq Bhat while announcing his resignation said, I’ve nothing to do with BJP and I resign from the party. I request people to forgive me, if my actions have hurt them.”

A similar situation had emerged after the militants killed a local BJP leader Sheikh Waseem Bari along with his father and brother in northern Bandipora district on July 8. As several party workers immediately announced their resignations, the BJP leadership began a concerted effort to dispel the fear instilled among the party cadres in the Valley. On its request, more than 100 party activists were provided security cover by the J&K police even though Mr. Bari and his kin had been targeted by the militants despite him being provided with ten Personal Security Officers (PSOs) who are now facing action over their “negligence” from duty.

BJP’s national general secretary, Ram Madhav, had after visiting the slain party leader’s home on July 12 demanded “enhanced and proper” security to the party workers in J&K in view of “constant threat” to their lives from separatist militants. The party’s vice president Avinash Rai Khanna had said that the party stands by its workers in Kashmir and was working for the solution of their problems.

“We’re solving the problems of workers whether it is at their personal level or administrative level. A party worker should talk to the party before he chooses to resign,” he had said.