In 1997, the NSCN-IM entered into a truce with the Centre for peace and since then has been continuing dialogue with centre's emissaries. 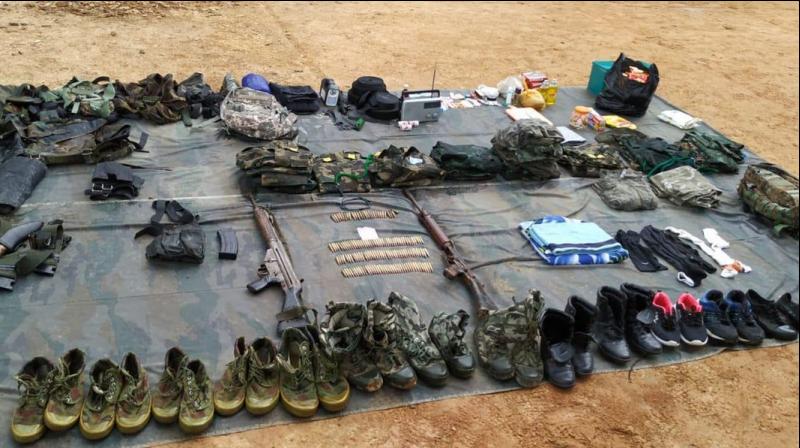 The weapons found by the raiding team included an American made M16 assault rifle with 125 rounds, one self-loading rifle with 26 rounds and some AK series assault rifles, apart from other ‘warlike stores’. (Photo: Twitter | @easterncomd)

New Delhi: The Army successfully dismantled an undesignated hideout of the Manipur’s insurgent group National Socialist Council of Nagaland (Isak-Muivah), after its members were found extorting from people at a village. The NSCN (IM), which is the largest insurgency group in the north-east, has a ceasefire with the centre and it has to report the location of all its camps to the Indian Army.

"An undesignated and unauthorised hideout of NSCN (IM) was busted on July 6 by the Army troops at Kekru Naga village in Manipur. Based on a specific input regarding NSCN (IM) cadres camping in Kekru Naga and carrying out illegal extortion, a well-coordinated operation was launched on the night of July 5," the Army said in a statement.

"However, seeing the troops advancing toward their camp, the cadres fled leaving huge amount of arms, ammunition, uniform and other war-like stores," the Army said, reported by NDTV.

A member of the National Socialist Council of Nagaland (Isak-Muivah) was detained after he was found trying to hide among people in plainclothes, the Army said.

The weapons found by the raiding team included an American made M16 assault rifle with 125 rounds, one self-loading rifle with 26 rounds and some AK series assault rifles, apart from other "warlike stores".

In a major blow to the insurgent groups #IndianArmy tps busted a NSCN(IM) hideout at Kekru Naga Village in Manipur on 05 Jul resulting in recovery of large quantities arms and ammunition @adgpi @spokespersonMOD pic.twitter.com/zWKHsJN5oU

The Army said it is working closely with the police, intelligence agencies, civil administration and the locals to identify the "unauthorised hideouts" of the NSCN (IM). "Immediate action is being taken to identify and dismantle such undesignated NSCN (IM) camps in Manipur and to stop atrocities as well as illegal activities of these cadres," the Army said in the statement.

The NSCN (IM), formed in 1980, is led by 85-year-old Thuingaleng Muivah; the other top leader of the group, Isak Chishi Swu, who died three years ago at 87 of multi-organ failure.

The NSCN-IM over the years has been accused of carrying out killings, extortion and other violent activities and its persistent separatist demand from India led to a military clampdown on the group.

In 1997, the NSCN-IM entered into a truce with the central government for peace and since then has been continuing dialogue with the centre's emissaries.

In August 2015, the NSCN-IM signed a framework agreement with the government which Prime Minister Narendra Modi described as a "historic" step to usher in peace in the state.