He said that the attackers have been identified as Saifullah, a Pakistani militant and another one is a local 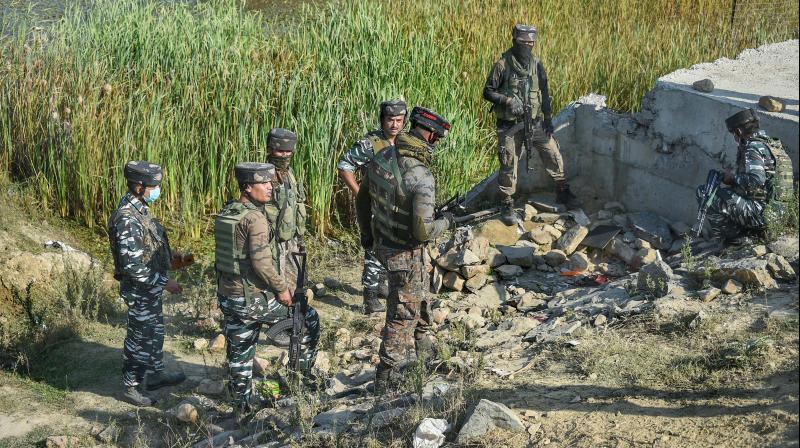 Srinagar: Two Central Reserve Police Force (CRPF) jawans were killed and three others wounded in a sneak attack of separatist militants in Pampore area on the outskirts of Jammu and Kashmir's summer capital Srinagar on Monday.

The spot where two motorcycle-borne militants targeted a Road Opening Party (ROP) of CRPF with automatic weapons is hardly four kilometres short of Lethapora where, at least, forty security personnel were killed and several others injured in an  attack carried by a  sole Jaish-e-Muhammad suicide bomber at a bus which was part of a CRPF convoy on February 14, 2019.

The police said the latest terror attack  was carried out by Lashkar-e-Tayyaba (LeT) and that both the assailants have been identified and a manhunt launched for them.

The slain jawans have been identified  as  Constables  Dhirendra and   Shailendra Kumar, both from 110 Battalion of the CRPF. The injured are being treated in Srinagar's 92 Base Army Hospital.

The police and CRPF officials said that the militant attack took place near Kandizal bridge at Tangan in Pulwama district along the bypass road connecting Srinagar with J&K's winter capital Jammu, injuring five jawans. "Two of the grievously injured boys succumbed at the 92 Base Hospital immediately after they and three others were admitted there," a CRPF spokesman said.

The officials said that soon after the attack whole area was cordoned off to nab the attackers but no arrests could be made. The search operation was called off  by sunset as militants had managed to escape from the area, they added

Inspector General of Police (IGP) Kashmir range, Vijay Kumar, said that the attack was carried out by two-bike borne LeT militants who have been identified and hunt to “neutralize them” has been started.

“Two militants from Lashkar-e-Tayyaba came on a motor bike and fired indiscriminately at the CRFP Road Opening Party here at Kandizal near Pampore. Two CRPF men died in the incident and three others sustained injuries who are stable,” the IGP told reporters at the site of the attack.

He said that the attackers have been identified as Saifullah, a Pakistani militant and another one is a local. “Hunt is on to track them down and I am hopeful they will be neutralized soon,”  he said.

He added that militants find it easy to target security forces on the highway "as it is a busy place where hundreds of civilian vehicles pass through every day".  He asserted, 'If we retaliate and fire indiscriminately too there will be civilian casualties. After targeting CRPF party today the  attackers managed to flee from the spot.”

J&K's Lieutenant Governor, Manoj Sinha, condemned the "despicable terrorist attack" and said that the sacrifice of the security personnel will not go in vain.

He said, ‘The sacrifices of our CRPF personnel will not go in vain. The government is determined and committed to foil the design of those who want to disrupt peace and derail the development of Jammu and Kashmir through such a terror attack. I assure the people of J&K and family members of our brave security personnel that we will punish the perpetrators of such terror attacks."