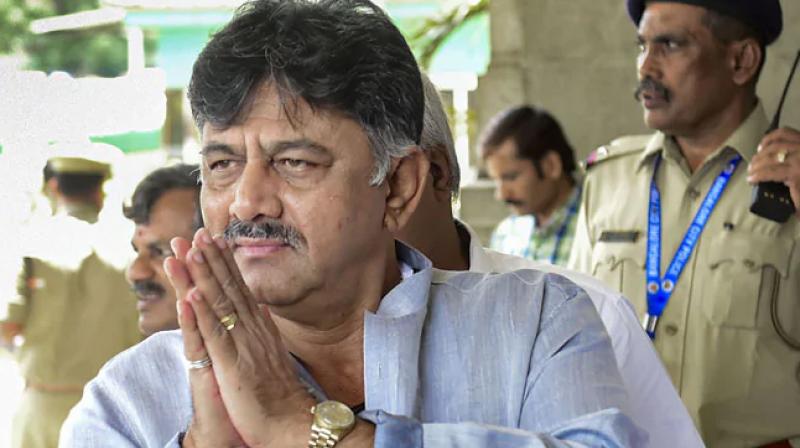 New Delhi/Bengaluru: The Central Bureau of Investigation on Monday registered a case of amassing disproportionate assets worth Rs 74.93 crore against Karnataka Congress chief D.K. Shivakumar, and raided 14 locations during which the agency claimed to have recovered Rs 57 lakh cash, officials said.

After registering the case under IPC sections related to criminal conspiracy and
provisions of the Prevention of Corruption Act, the CBI raided 14 locations spread
across Karnataka, Maharashtra and Delhi connected with Mr Shivakumar and his
brother, D.K. Suresh, an MP. Mr Shivakumar said the action against him was part of the BJP's "vendetta politics".

The Congress hit out at the BJP-led Central government, accusing it of "witch-hunt",
and linked the CBI action to the November 3 by-election in two Assembly seats in
Karnataka, Sira and RR Nagar.

The case, CBI alleged, was registered after a seven-month-long preliminary inquiry
looking into disproportionate assets of Mr Shivakumar and his family members amassed during his tenure as a minister in the Karnataka government.

This is the first case by the CBI against Mr Shivakumar, Karnataka Pradesh Congress
Committee president and an MLA, who was earlier arrested by the Enforcement
Directorate in a case of alleged money laundering, CBI officials said.

After registering the case under IPC sections related to criminal conspiracy and
provisions of the Prevention of Corruption Act, the CBI teams searched 14 locations
spread across Karnataka, Maharashtra and Delhi.

Nine locations in Karnataka, four in Delhi and one in Mumbai were searched, which
included the residence of Mr Shivakumar at Safdarjung Enclave and that of his MP
brother in Kaveri Apartments in the national capital and their residences in
Bengaluru.

"Searches were conducted today at 14 locations including Karnataka, Delhi, Mumbai
at the premises of said MLA (Shivakumar) and others which led to the recovery of
cash of Rs 57 lakh (approx) and several incriminating documents including property
documents, bank related information, computer hard disk, etc. Investigation is
continuing," CBI spokesperson R.K. Gaur said in a statement.