In a similar case, an accused was caught impersonating as Commander in the Indian Navy. 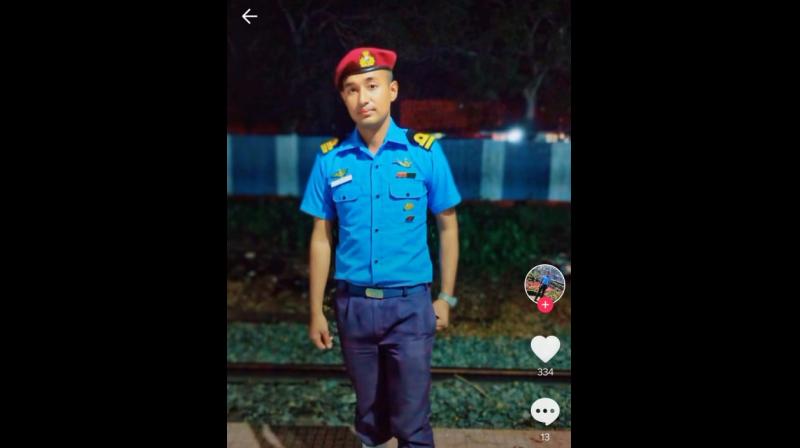 One of the photos posted by the accused.

Kolkata: A youth from West Bengal has been arrested by the Kerala Police near the Naval Base in Kochi for allegedly posing as a young officer (Lieutenant) in the Indian Navy. The accused, 23-year-old Raja Nath, hails from Nadia district. A look at his photos in uniform reveal his fraudulent use of the badge and Maroon beret of the Navy's Special Forces: MARCOS.

Defence Public Relation Officer in Kochi, Captain Sridhar Warrier, said that the accused had also travelled to various places in uniform and uploaded several videos on ‘TikTok’ posing as a Naval Officer.

"Raja arrived Kochi in October of 2019 and was residing in an apartment: A 160, Water Tank Road at Mattummel in Thevara of Kochi till date. The individual had got uniforms made from shops at Kochi. The police has registered a case against the individual under Section 140 of Indian Penal Code for impersonating as an officer in Indian Navy and has also recovered Naval uniforms/ badges from his residence," he said.

A similar incident had also been reported from Thevara Police Station. In this particular case, the accused, Nibit Daniel, was impersonating as a Commander in the Indian Navy to allegedly carry out fraudulent activities. He too had got his uniforms stitched locally, Captain Warrier said.

Warning that impersonation of service personnel is a cognizable offence and those indulging in such activities would be dealt with firmly, Captain Warrier added: "Anti-national elements could utilize this method for ulterior motives, which pose a grave threat to India's national security. District administrations of Kutch and Srinagar, and the Punjab government has already issued orders for the ban on unauthorized sale of Armed forces uniform under section 144 of CrPC. Indian Navy is taking up a similar case with Kerala government for ban of unauthorised sale of Armed forces’ uniform".